Russia’s Only Aircraft Carrier Is Screwed

One of the world's largest dry docks sank at a shipyard in northwestern Russia late last month, throwing a wrench... 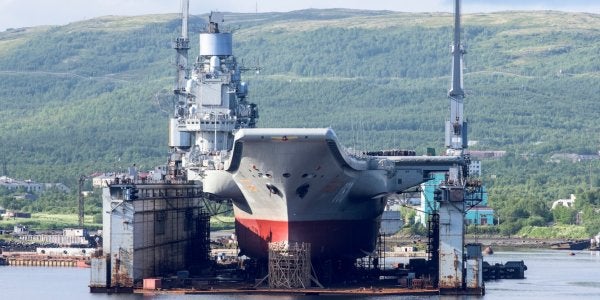 One of the world's largest dry docks sank at a shipyard in northwestern Russia late last month, throwing a wrench into plans to repair and modernize the country's sole aircraft carrier — the Admiral Kuznetsov.

The Kuznetsov, which was sent for repairs in May after a history of breakdowns, was being refitted and upgraded at the PD-50 dry dock at the 82nd Repair Shipyard when a power supply disruption caused the pumps supporting the massive 80,000-ton structure to break down. As the damaged dock sank to the depths, two large cranes fell on the aircraft carrier, tearing a substantial 200-square-foot hole in the vessel.

Russian officials initially said that the accident would not delay efforts to repair the flagship of the Russian Navy, which returned from Syria spewing black smoke after losing two of its aircraft to tragic accidents, but it appears that the loss of the critical PD-50 dry dock may be a serious setback. The overhaul was expected to be finished in 2021, but it is unlikely that the country will be able to meet that deadline.

Russia has found viable alternatives to the sunken dry dock for almost all of its naval vessels, all except for the Kuznetsov, officials now admit.

“We have alternatives actually for all the ships except for Admiral Kuznetsov,” Head of the United Ship-Building Corporation Alexei Rakhmanov told the state-run TASS news agency Wednesday. “As for the ships of the first rank, … the Admiral Kuznetsov, creates certain inconveniences.”

“We hope the issue of the docking of first-rank ships will be resolved in the near future,” he added, noting that the country is investigating other alternatives. The Kuznetsov is reportedly sitting at the 35th Ship Repair Plant. The PD-1 dock at the Severodvinsk shipyard was initially mentioned as a possible alternative, but it was later determined that the facility could not handle a ship of that size. Russia is believed to be looking seriously at trying to refloat the sunken dock.

The Diplomat reports that Russia lacks any acceptable alternative to the PD-50, which would take six months to a year to recover, an operation that would likely require international support, which it does not seem likely to receive. And given the country's souring relations with its European neighbors, Moscow probably can't count on Sweden building it another dry dock.

The loss of the PD-50 dry dock and the ensuing damage to the Kuznetsov begs the question of whether it is even worth it to salvage its carrier program given its poor performance record and unreliability, The War Zone assesses. The Kuznetsov carrier is regularly seen accompanied by tugboats, preparation for practically inevitable problems at sea.

It is currently unclear how the loss of the important dry dock will affect other ships slated for repair and modernization.

admiral kuznetsov
How The Other Half Fights
military tech
news
Russia