The security forces at U.S. Air Force installations face some truly scary challenges, from vehicular intruders on the flight line to … Continued 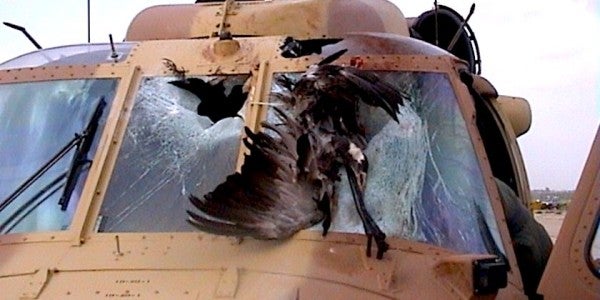 But there's one threat that's both difficult to anticipate and near-impossible to thwart: motherf–king birds.

We're deadly serious. Bird strikes on U.S. military aircraft destroyed 27 U.S. Air Force airframes and left 36 airmen dead between 1985 and 2016, according to data compiled by the 28th Bomb Wing at Ellsworth Air Force Base. As recently as 2016, a flock of birds helped contribute to the disastrous aborted takeoff of a B-52H Stratofortress bomber at Andersen Air Force Base in Guam.

Alfred Hitchcock was right: those damn, dirty birds are up to no good.

The Air Force however, has engineered a solution to their winged problem in the form of an “automated bird deterrent system.” That's right: the Air Force has the bird cannon, and they're not afraid to use it.

It may seem like a steep price tag for a relatively simple system: $150,000 is a small price to pay to keep birds away from the flight line.

According to Military Times, the Air Force racked up nearly $182 million in damage to aircraft thanks to more than 400 wildlife-related mishaps between 2011 and 2017.

“In the middle of our migration season (October, November, April and May), it's not abnormal for us to hit and kill a bird at least once a week. They cost us hundreds of thousands of dollars a year.”

Let this be a warning to the all the adventurous birds out there: Should any fowl ran afoul of base airspace, they'll only end up getting goosed by the Air Force's canary cannon. So back off, you winged a-holes — this ain't just for the birds.