A decade after the U.S. Air Force commissioned the next generation of GPS satellites, the first of these spacecraft is … Continued 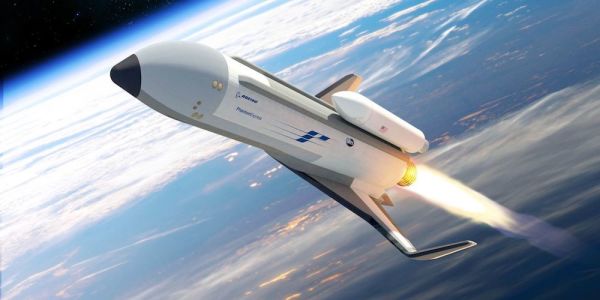 A decade after the U.S. Air Force commissioned the next generation of GPS satellites, the first of these spacecraft is finally set to launch into orbit later this year.

As with other national security missions, a roughly 200-foot-tall rocket will blast the massive satellite to space, fulfilling a contract worth more than $80 million.

But as nations develop technology to disable or shoot down satellites — as China did to one of its own satellites with a ground-based ballistic missile in 2007 — the U.S. military has started to look at options for rapidly and cheaply launching smaller crafts into space.

An experimental program spearheaded by a Pentagon research agency could eventually be part of that solution.

Related: Here’s What Trump’s Space Force Will Actually Do, According To The Head Of NASA »

The vehicle’s first test flight is set for 2021, which hints at the Defense Department’s growing interest in reusable rocket technology, particularly its potential to drive down launch costs and speed up turnaround time.

“SpaceX has had its success,” she said. “I think this engine test also demonstrates that other companies are doing the technology development and having success that will enable reusability.”

Boeing's reusable spaceplane, depicted as a rendering, is under development through a public-private partnership with the Defense Advanced Research Projects Agency.Boeing

Elon Musk’s SpaceX brought the concept of reusability back into the public eye with its 13 flights of used first-stage boosters since 2017, though DARPA and Boeing officials say the experimental spaceplane is aimed at a much lighter weight class of satellites. SpaceX’s workhorse Falcon 9 rocket is capable of carrying payloads of about 50,000 pounds to low-Earth orbit.

Scott Wierzbanowski, experimental spaceplane program manager at DARPA, described it as a “launch on demand” kind of service, in which smaller satellites could be taken to a specific orbit when they need to, rather than piggybacking onto scheduled launches that revolve around the needs of the larger, primary payload.

“The military right now is really reassessing their needs,” said Bill Ostrove, aerospace and defense analyst at Forecast International. “DARPA is trying to see what is possible.”

The Air Force has also developed the X-37B experimental space plane, which looks like a smaller version of the space shuttle orbiter. Details of its missions are scarce, but the uncrewed robotic space plane’s last mission involved 718 days in orbit before returning to Earth.

Southern California has played a role in the DARPA spaceplane’s development, with some design work, engineering and program management taking place in the region, largely at Boeing’s Huntington Beach facility, but also in Seal Beach and El Segundo. Engineering staff for the rocket engine, manufactured by Aerojet Rocketdyne, are based in Canoga Park.

The 100-foot-long vehicle with a 62-foot wingspan is being designed for rapid reusability similar to that of commercial aircraft, program officials said. The spaceplane, however, will launch vertically like a typical rocket, deploy an expendable second-stage booster that will push the satellite to its intended orbit and then return to Earth and land horizontally like a plane on a runway.

To do this, Boeing has leaned on its commercial aircraft division. The composite materials used for the spaceplane’s fuel tanks, wing skins and other areas were based on investments made during development of the company’s 787 jetliner, which has an outer structure largely made of composites.

The spaceplane’s design approach was also derived from commercial aircraft to make the vehicle easier to maintain and operate, said Steve Johnston, director of launch at Boeing Phantom Works.

The vehicle’s engine is composed of flight-qualified and previously used hardware flown on previous engines and is derived from the legacy engines that powered NASA’s Space Shuttle.

The spaceplane is expected to launch satellites to low-Earth orbit weighing up to 3,000 pounds. That means the spacecraft would be well below the weight of the typical school bus-sized spy satellites that are launched to a higher, geostationary orbit.

Related: What We Know About The Mysterious Air Force X-37B Space Plane »

But they would be heavier than satellites weighing hundreds of pounds that are envisioned as the core of commercial constellations — of hundreds or even thousands of spacecraft — to provide broadband or Earth-imaging capabilities.

DARPA recently launched a separate challenge focused on commercial small-satellite launch companies, providing cash prizes for teams that can launch tiny payloads with minimal notice. Wierzbanowski of DARPA said he could envision the two programs working together and said their focuses were “complementary.”

Total government funding for the spaceplane program is estimated at $146 million. Boeing declined to disclose its investment, saying only that it was a “significant commitment.” The ultimate goal is to reach a per-launch cost of $5 million, Wierzbanowski said.

That could make the spaceplane, once operational, significantly cheaper than the existing rockets already aimed at the medium-sized satellite market, including India’s PSLV, Europe’s Arianespace Vega and Northrop Grumman Corp.’s Minotaur IV. The launch price for a Minotaur or Vega rocket can range from $35 million to $40 million, said Phil Smith, senior space analyst at Bryce Space and Technology.

Boeing plans to commercialize the spaceplane, which it calls the Phantom Express, offering it to government and commercial customers.

But the unique design concept is no guarantee of success, Smith said.

“The engine test was spot on in terms of the expectations for that engine to support the mission,” he said. “But it does remain to be seen.”