The U.S. Air Force set out to return to Cold War numbers by growing nearly 25% and taking on hundreds... 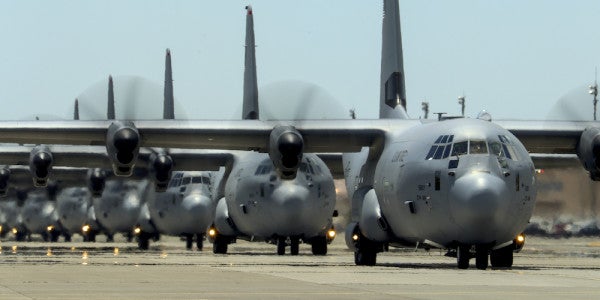 The Air Force, which typically acquires aircraft only after long vetting and bidding processes, will attempt the radical change in short order to fulfill President Donald Trump's vision of a bigger military to take on Russia and China.

In the U.S.'s new National Security Strategy, National Defense Strategy, and Nuclear Posture Review, the Trump administration redefined the US's foremost enemies not as rogue groups like ISIS or al Qaeda, but China and Russia.

While the U.S. has fought counter insurgencies against small terror groups and non-state actors nonstop since September 11, 2001, the resurgence of an aggressive Russia now at war in Ukraine and Syria, and the emergence of China now unilaterally attempting to dominate the South China Sea, has renewed the US military's focus on winning massive wars.

The U.S. Navy has announced similar plans to grow its fleet size by nearly a third and shift tactics to better challenge Russia and China.

But now the Air Force plans to grow in all directions at once, with more space, cyber warfare, logistical support, drones, tankers, and combat aviation all at once.

What the Air Force wants

This chart shows how many new squadrons the Air Force wants and how they'll be distributed. The Air Force announced a goal of 386 squadrons, up from 312. Depending on the airframe, a squadron can have 8-24 planes.

For the bomber squadrons, which include nuclear-capable bombers like the B-52 and B-2, that number will grow only slightly and likely include the mysterious new B-21 Raider bomber, which no one has ever seen outside classified circles.

In the fighter jet department, it's likely F-35s will comprise most of this growth. Aerial tankers and intelligence, surveillance and reconnaissance platforms, likely drones, will also see a big bump.

The Air Force hopes to build the force up to 386 squadrons by 2030, but has not provided any information on how it plans to fund the venture. The U.S. Air Force has requested $156 billion for next fiscal year, already a six percent bump over the previous year.

Secretary of the Air Force Heather Wilson delivers her the “Air Force We Need,” address during the Air Force Association Air, Space and Cyber Conference in National Harbor, Maryland, Sept. 17, 2018.

While Wilson promised to streamline acquisition, which famously can take years and cost billions, there are real doubts about how fast the organization can move. The Air Force started working on the F-22 in 1981. It first flew in 1997 and first went into combat in 2014. The F-35 started in 2001 and just last year experienced its first combat in Israel's service.

Additionally, the move would require the Air Force to bring on about 40,000 new people at a time when the force has a near-crippling problem with retaining top talent.

“We are not naive about the budget realities,” Wilson said at the Air Force's annual Air, Space & Cyber Conference. “At the same time, we think we owe our countrymen an honest answer on what is required to protect the vital, national interests of this country under the strategy we have been given, and so we believe this is, if not the perfect answer, it is an honest answer to that question: What is the Air Force we need?”

A growing threat from China

Currently, China's military is in the midst of building up a tremendous air force and navy while also threatening some of the US's core interests and most promising technologies.

The biggest US Air Force defense projects involve stealth aircraft, like the B-21 and F-35. As of yet unpublished research on China's military reviewed by Business Insider found Chinese fighter aircraft now number around 1,610 compared to about 1,960 U.S. fighters.

China has made strides towards quantum radars designed to negate the U.S. stealth advantage as well as a stealth fighter of its own, the J-20.