Vintage airpower back in black 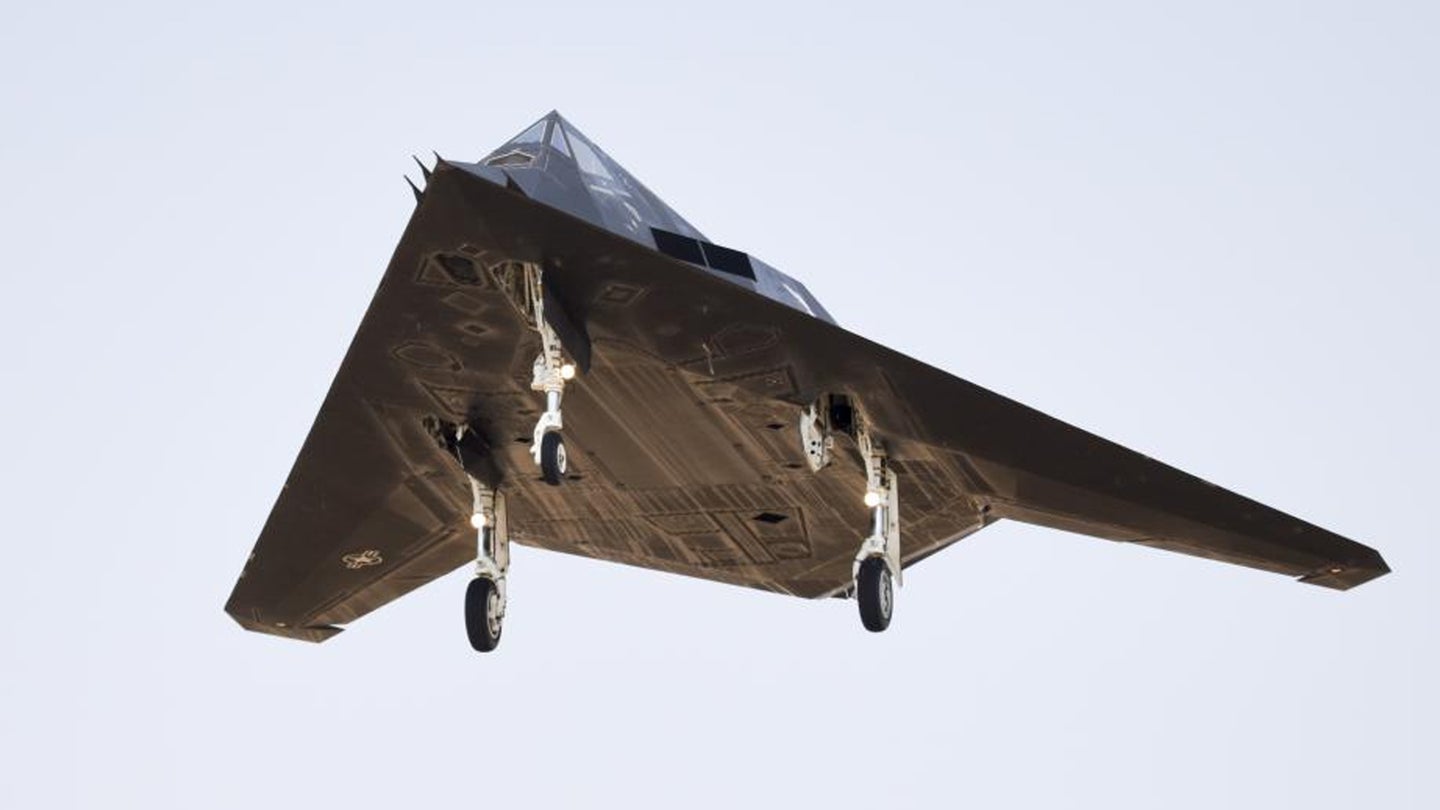 The Air Force brought back one of its most distinct aircraft in a very public fashion on Tuesday when it released a video of an F-117 Nighthawk stealth attack plane coming in for a landing at Fresno Yosemite International Airport in California. Retired since 2008, the Nighthawk is famous for its unusual arrowhead shape and its record for destroying thousands of targets in Operations Desert Storm and Iraqi Freedom before the enemy even knew what hit them.

Painted all black and covered with sheets of radar-absorbent material, the F-117 looks like an arrow shot out of Hades, so it’s a treat to see one flying overhead in broad daylight above a busy civilian highway. But what is an aircraft that’s been retired for 13 years doing in the sky anyway?

The Fresno-based 144th Fighter Wing explained in its Facebook post that the Nighthawk was returning from a training mission with F-15 pilots, and that two Nighthawks were participating in air combat training missions at the 144th throughout the week.

“This week we reap the benefits of two plus years of careful communication and determined coordination with agencies and leaders overseeing these unique USAF assets,” Air Force Col. Troy Havener, 144th Fighter Wing commander, said in a press release on Tuesday. “The training against integrated forces that include the F-117 will challenge and sharpen pilots, as well as build confidence in tactics and systems needed to defend our nation.”

Though the footage released on Tuesday represents a rare public glimpse of the Nighthawk, the aircraft has been flying “red air” aggressor missions for two years at the very least, according to The War Zone. “Red Air” refers to the pilots who pretend to be the bad guys when they face off against other pilots in training missions.

One of the interesting things about using an F-117 for fighter training exercises is that, while the Nighthawk has the “F” designation reserved for fighter aircraft, the black jet has always been used as a ground attack platform like the legendary A-10 Thunderbolt II. But there’s a good reason why a retired stealth attack plane is being used to train pilots in air-to-air combat.

According to The War Zone, the answer comes down to three words that haunt many Air Force leaders’ dreams: China and Russia. Stealth technology is now more available to those adversaries and cruise missiles also have smaller radar and infrared signatures, which is a problem for defending American airspace.

Many U.S. fighters like the F-15C and D models now have special electronically scanned array radars and improved Sniper targeting pods so they can engage these targets, The War Zone reported, but they need a few good dummies to practice on. Enter the Nighthawk, which has a similarly tiny presence on radar and infrared and which many current American pilots have never flown against.

“Our Griffin pilots, operations, and maintainers, are thrilled to be able to participate in this unique opportunity,” said Lt. Col. David Allamandola, advanced programs officer with the 144th Fighter Wing. “It is a very special privilege to do open air training missions with the F-117 Nighthawks.”

Air Force officials noted that it has 48 Nighthawks in its inventory, and is “disposing” of four aircraft each year, meaning the aircraft is being offered to museums through the USAF Strategic Basing program and the National Museum of the USAF.