The U.S. military's hypersonic bullets and robot dogs aren't the only innovative technologies to get a workout during a recent Air Force exercise 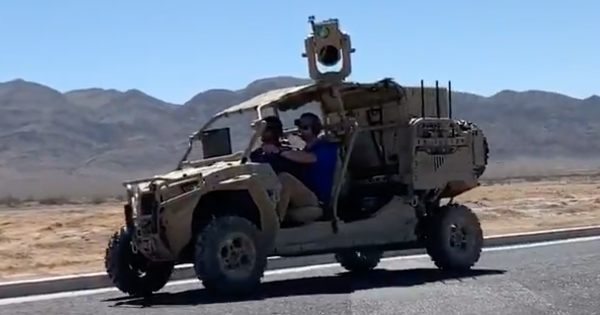 The U.S. military's hypersonic bullets and robot dogs aren't the only innovative technologies to get a workout during a recent Air Force exercise.

The system was mounted on a Marine Corps Utility Task Vehicle that, produced by Polaris, integrated the CLWS as the first ground-based laser approved by the Pentagon for use by U.S. service members back in 2019.

During the demonstration, the CLWS system didn't just counter drones with a relatively-low-powered laser beam, but also transmitted live video and readings on the threats, as well as various elements of the convoy, to operators at Andrews Air Force Base in Maryland, according to Boeing.

The demonstration took place as part of a test of the Air Force's next-generation Advanced Battle Management System, “a state-of-the-art system designed to provide combatant commanders the ability to control Department of Defense assets in real-time,” according to the Air Force.

“In a future scenario, an integrated and networked direct energy capability – as demonstrated in this exercise by CLWS – would provide operators with vital information and a means to respond to threats at greater speeds,” said Boeing Laser & Electro-Optical Systems program manager Ron Dauk in a statement.

The Air Force has been eyeing the CLWS at least since taking the system for a spin at the Army's Maneuver and Fires Integrated Experiment (MFIX) at Fort Sill in Oklahoma late last year.

The CLWS is already part of the Army’s Mobile Expeditionary High Energy Laser (MEHEL) program that, since first testing the system in 2016, has slapped laser weapons on Stryker infantry carrier vehicles deployed to Europe over the past several years.

As of January. the CLWS has successfully countered more than 100 unmanned aerial vehicles in at least five separate tests of the system, according to Defence Blog.

“The ABMS exercise is further proof of Boeing’s combat-ready capabilities,” Boeing Integrated Air and Missile Defense chief Robert Green said in a statement. “Military operators continue to have great success with our systems with only minimal training.”