This picture looks fake but trust us, it's totally real. 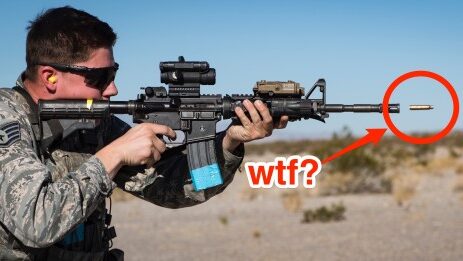 This picture looks fake but trust us, it’s absolutely real and a totally amazing shot on the photographer’s part.

The photo was floating around among some doubters on Instagram, which is where we spotted it. Those with a keen eye and even a cursory knowledge of the M4 rifle will immediately wonder, why is that shell casing in front of the barrel?

Normally, when an M4 fires, the spent brass is ejected to the right and rear of the shooter, at anywhere between 3 and 4 o’clock. But in this case, the brass was ejecting forward. Which is weird as all hell.

We reached out to the photographer, Airman 1st Class Andrew Sarver, who assured us that yes, it’s legit. The photo was shot last month during range training with a K-9 unit at Nellis Air Force Base, Nevada, and
part of a larger gallery he directed us to on DVIDS.

“The M4 we were using had been ejecting brass forward (at about a 2-3 o’clock position) throughout the entire exercise,” Sarver told Task & Purpose. “From what I’ve been told, the M4 can sometimes do that when there is too much gas pressure. I just had great timing with capturing the shell at the exact rotation and elevation with the barrel!”

A Google search for “can AR brass eject forward?” yields plenty of people asking why it’s happening to them, with helpful gun aficionados offering myriad reasons. Among them is brass hitting the brass deflector, or more often than not, too much gas. It’s not a huge problem for the shooter, but it can cause a weird ejection, while resulting in more wear and tear to the rifle.

“The photo is definitely real, the timing was just impeccable,” Staff Sgt. Matthew Gluyas, the airman in the photograph, told Task & Purpose. “Some people were trying to say I shot the casing out of the barrel or we photoshopped it to make it look like that but that was definitely not the case.”

Besides those explanations, we also looked at the metadata on his photo and it didn’t offer any clear tells that it was Photoshopped. And among Sarver’s gallery was another picture taken from a different angle, which showed brass going forward instead of where it belongs.

And that concludes Task & Purpose myth busters for now.

Editor’s note: A version of this article was first published on Oct. 9, 2018.