“It took five minutes for me to learn how to use it ... It quickly became apparent how our security personnel could utilize this tool in our operations" 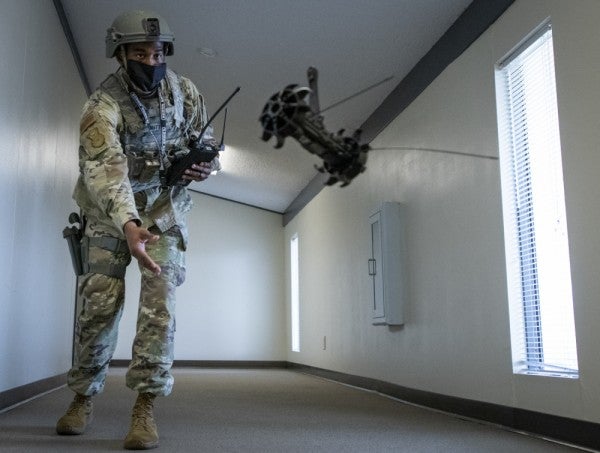 Fans of the video game Tom Clancy's Rainbow Six Siege will recognize a new gadget the Air Force is using to help base security forces scout out threats and inspect vehicles without putting themselves at risk.

The best part: you can absolutely chuck it!

Airmen with the 96th Security Forces Squadron are now in possession of Throwbots, wheeled micro-robots that can roll into unsafe areas and transmit video and audio recon back to defenders, allowing them to make informed decisions without getting in the line of fire.

The Throwbot was recently featured in an article by Kevin Gaddie, a spokesman with the Eglin Air Force Base's 96th Test Wing. It's unclear how many other security forces personnel across the force are making use of the new device.

“It took five minutes for me to learn how to use it,” said Leon Gray, from the 96th SFS, in the Air Force article. “It quickly became apparent how our security personnel could utilize this tool in our operations.”

If this gadget sounds familiar, it should. In the first-person shooter Rainbow Six Siege, players use wheeled drones to scout out buildings, scan for enemy players, and even serve as stationary cameras.

It sounds like the Air Force has similar plans in mind: specifically, airmen think the Throwbot will come in handy in active shooter situations, where the drone’s camera allows operators to see around corners, locate and identify hostages and threats, and reveal a room’s layout.

Airmen also plan to use the drone to check under vehicles when conducting commercial vehicle inspections, according to the Air Force.

Not only is the Throwbot useful, it's tough, too. According to the Air Force, the drone can take 30-foot falls, crawl over a variety of terrain, and tow up to four pounds of additional equipment.

But why, we ask, is it important to be able to throw a robot? According to Throwbot manufacturer Recon Robotics, toss-ability is great when you need eyes in an upstairs room that normal ground robots may have trouble accessing in the first place.

“If we had owned the robot back then, we would have breached an upper window and thrown in the robot,” said Sgt. James Evenson, of the Rochester, Minnesota SWAT team, in a product testimonial. “As it was, we ended up deploying gas in the residence, and the cleanup and remediation was a very expensive proposition.”

The Throwbot is also more versatile than heavier, tank-like drones that can't be carried deep into the middle of a dangerous situation, other SWAT officers said.

“What our team really likes is that it can be easily carried in an entry team backpack and when you need to use it, you can simply grab it, pull the pin and throw in the robot,” said Sgt. Jake King, of the Marietta, Georgia SWAT team, in a testimonial.

Airmen at Eglin seem to be in agreement with their civilian counterparts.

“We’re glad to have the Throwbot as another 96th SFS tool to use in our ever-evolving security mission at Eglin,” Gray said in the article. “It will be especially great to have in emergencies, to help us make informed decisions when seconds count.”