The U.S. Army has proposed three different projects this month for 120mm mortars. Slated for production in 2021 is the Future... 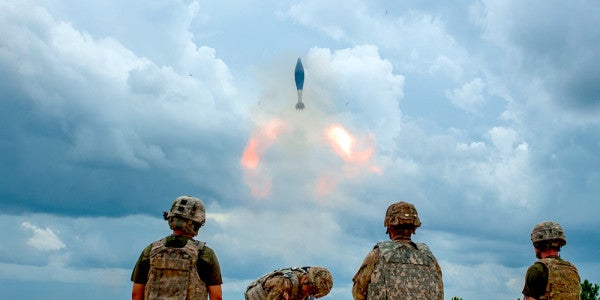 The U.S. Army has proposed three different projects this month for 120mm mortars.

Slated for production in 2021 is the Future Indirect Fire Turret, a120mm mortar housed in a turret that can be mounted on a Stryker, and the future Armored Multi-Purpose Vehicle (a replacement for the M113) and Next Generation Combat Vehicle (which will replace the M1 Abrams tank and M2 Bradley infantry fighting vehicle).

The Army already has a Stryker mortar carrier for its Stryker infantry battalions: the M1129 is armed with a 120mm mortar, as well as either an 81mm or 60mm mortar that can be only be fired once dismounted. But the Army wants a weapon that can fire heavier projectiles at a greater range than existing 120mm mortars such as the M121. Yet the capabilities the Army wants for the FIFT go far beyond a typical self-propelled mortar. The turret, which can either be manned or unmanned, will be able to launch missiles and kamikaze drones such as the Lethal Miniature Aerial Missile System or Single Multi-missile Attack Munition.

Maximum rate of fire should be 24 rounds per minute for two minutes, and rapid fire of 4 to 12 rounds in four seconds. The FIFT should also “feature a level of automation, such that physical burden on crew is reduced, while supporting a high rate of fire capability.” While the emphasis seems to be on crew fatigue, automation also offers the possibility of using a smaller crew (the M1129 has a crew of five).

Alongside the FIFT, the Army is looking for a remote-controlled 120mm or 81mm mortar. The Mortar Automated Remote Capability is an unmanned turret designed for “immediate highly accurate response while under fire,” according to the Army. “This capability should provide a minimum of 20 rounds before a resupply is required” from a vehicle.

Minimum and maximum range for a 120mm model are similar to the Future Indirect Fire Turret. For the 81mm mortar version, minimum range should be 6,000 meters to 15,000 meters (4 to 9 miles).

Finally, there is the 120mm Extended Range Mortar System, intended as a replacement for the M120A1 towed 120mm mortar. The Army wants a fairly mobile 400-pound weapon, capable of being mounted on or towed by a lightweight combat vehicle, or capable of being carried by dismounted infantry. “The system must be man-portable by the squad, with each member of the four-man squad having a weight allocation of roughly 100 pounds of this kit,” according to the Army announcement.

The weapon should have a range of 9 kilometers (5.6 miles). In a nod to the effects of firing a mortar on eardrums and other body parts, the Army wants the new mortar to “limit blast effects and crew exposure to overpressure to acceptable limits in order to support the firing of up to 100 rounds per day.”

Russia has a long tradition of using mortars. The Soviet Union used the M1938 and M1943 120mm towed heavy mortars extensively during World War II and the Cold War as a form of cheap but powerful fire support. Russia still uses the 2S12 towed 120mm mortar.