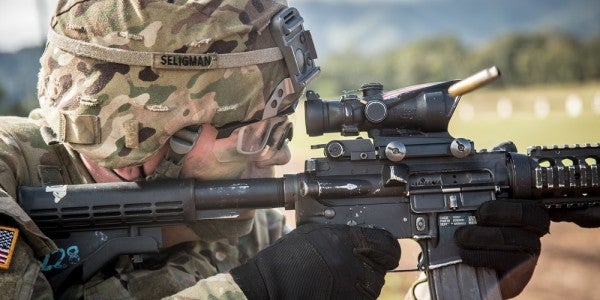 Both the Army and Marine Corps are checking their M4 carbines and M16 rifles for a malfunction with the selector switch that causes the weapons to fire without soldiers or Marines pulling the trigger.

The Army first issued a safety message about the issue on March 29 following an incident at Fort Knox, Kentucky, where a soldier’s M4A1 carbine went off unexpectedly during troubleshooting, said R. Slade Walters, a spokesman for U.S. Army Tank-automotive and Armaments Command.

“There have been no injuries reported as a result of this issue,” Walters told Task & Purpose on Friday. “The unintended discharge occurred on an M4A1 carbine that had recently been converted as part of a Product Improvement Program. The incident was investigated and another was released on April 18, 2018 to address all of the M4 and M16 family of weapons. The investigation and inspections are ongoing.”

TACOM has found the malfunction in 6 percent of 52,000 weapons tested so far, Walters said. The Army will test a total of 903,000 rifles and carbines over the next 6 months and it expects repairs will take an additional 12 to 18 months.

So far, no Marine Corps weapons have accidentally fired due to the selector switch malfunction, said Monique Randolph, a spokeswoman for MARCORSYSCOM.

“The additional function check is a precautionary action taken by the Marine Corps in response to the malfunction identified by the Army,” Randolph said.