Army commanders: Are you worried about losing lieutenants on land nav courses or privates running away into the Taliban-infested mountains … Continued 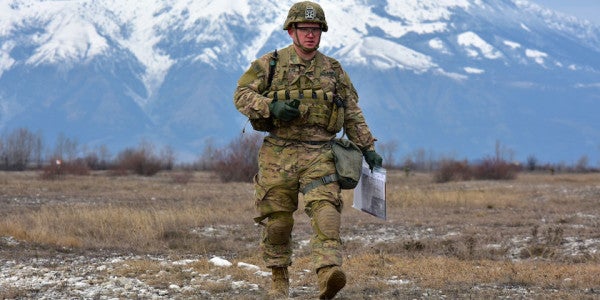 Army commanders: Are you worried about losing lieutenants on land nav courses or privates running away into the Taliban-infested mountains of Afghanistan? At last, you can rest easy. The Army has just purchased a ton of personnel locator devices to keep track of individual soldiers, wherever they may be.

Last month, the totally-not-evil-sounding defense tech company McMurdo Inc. was awarded a $34 million Army contract to manufacture an “indefinite” amount of Personnel Recovery Devices (PRD) for our troops, according to a press release issued by McMurdo’s parent company, Orolia.

As Military Times notes, the PRD fulfills an Army requirement for locator devices capable of functioning in GPS-degraded or denied environments. Military Times also reports that the device is “slightly thinner than a beer can.” (Somebody get that device a cheeseburger!)

In addition to being smaller and lighter than the commercially-made personal beacons often carried by mountain climbers, kayakers, and other free spirits, the PRD also boasts improved accuracy and ruggedness.

“The PRD will be capable of transmitting both open and secure signals (training-combat dual mode) to alert and notify that a soldier has become isolated, missing, detained or captured,” states the release.

The contract puts yet another point on the board for McMurdo, which two years ago was awarded a $3 million contract for 16,000 of its patented FastFind 220 personal locator beacons. Handheld and very yellow, the device “is used to notify emergency personnel during an air, land, or water emergency in remote or high-risk environments,” according to Military.com.

“We are extremely proud and honored to have been selected by the U.S. Army as the provider of this critical positioning device for the safety of U.S. warfighters,” the French chief executive officer of Orolia, Jean-Yves Courtois, said in the press release.