Inside The Army’s Pursuit Of A High-Tech 6.8mm Round 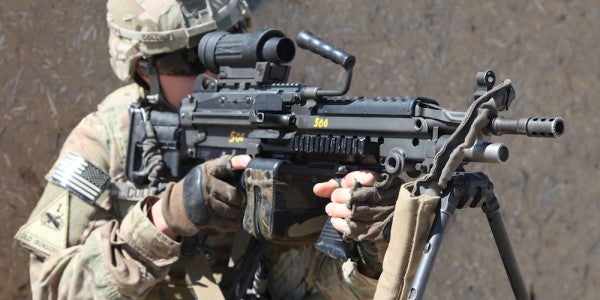 This week, U.S. Army leaders revealed a much clearer picture of the service's plan to replace its M249 squad automatic weapon and M4A1 carbine with weapons that share an advanced 6.8mm round.

For more than a year, modernization officials have offered few details about the Next Generation Squad Weapon program. But over the past three months, the service has taken tangible steps to advance the effort from concept to prototype.

The solicitation followed an announcement in July that the Army had awarded five contracts to gun makers to develop prototypes of only the auto rifle.

Brig. Gen. Anthony Potts, commander of Program Executive Office Soldier, explained how the solicitations work together at the 2018 Association of the United States Army's Annual Meeting and Exhibition.

The prototypes from the contracts awarded in July are scheduled to be delivered to the Army next June for evaluation, he said.

The release of the Oct. 4 solicitation is designed to get feedback from the defense industry about making adjustments to the Army-developed 6.8mm round so it works efficiently in both the rifle and auto rifle versions of the NGSW, Potts explained.

“The rationale for doing that is we truly want to get to a common cartridge,” he said. “You want the engineers that are developing these weapons to be able to optimize both concurrently. If you put the AR out first, then they are going to optimize that round for the AR; you put out the rifle first, then they are going to optimize it for the rifle. The round might be too heavy and too big for the rifle, and one might get you a round that's not quite enough for an automatic rifle.”

The Army's interest in developing an advanced 6.8mm round to make the squad more lethal emerged out of a 2017 Small Arms Ammunition Configuration Study, said Brig. Gen. David Hodne, director of the Soldier Lethality Cross-Functional Team.

“One of the foundations of that was probability of incapacitation,” he said. “Previously, it was good enough to hit something; probability of hit drove a lot of our requirements. We are now looking at energy and range … critical factors that drive the direction of the Next Generation Squad Weapon in both the automatic rifle and the rifle.”

Setting ambitious goals for creating a “leap-ahead” weapon system that features an integrated fire-control system and specialized ammunition is nothing new for the Army.

The Punisher and other attempts

Army engineers worked with industry in the mid-1990s to develop the Objective Individual Combat Weapon, or OICW, a dual weapon system that feature a 20mm airburst weapon mounted overtop a 5.56mm carbine. A high-tech fire-control system allowed soldiers to program 20mm rounds to explode over top of enemy behind cover.

The OICW, weighing 18 pounds, proved too heavy and bulky for the battlefield, so the Army attempted to develop the airburst weapon separately. The XM25 featured a 25mm round for increased lethality.

The weapon was sent to Afghanistan for operational testing, and combat troops nicknamed it the Punisher, Army officials said.

Problems with the program started in February 2013 when the XM25 malfunctioned during its second round of operational testing in Afghanistan, inflicting minor injuries on a soldier.

A month later, elements of the 75th Ranger Regiment refused to take the XM25 with them for a raid on a fortified enemy compound in Afghanistan because they were concerned its limited basic load of 25mm rounds was not enough to justify taking an M4A1 carbine out of the mission, sources familiar with the incident said.

Last year, the Army canceled its agreement with Orbital ATK Inc., which led to the end of the XM25 program.

There have been other slow-burn efforts, such as the Lightweight Small Arms Technology, a program the Army has invested in during the past decade to develop weapons that fire special case-telescoped ammunition.

Last year, Textron Systems officials showed off their latest offshoot of the LSAT, the Intermediate Case-Telescoped Carbine, chambered for 6.5mm on the AUSA exhibition floor.

The company chose to use the 6.5mm CT round while the U.S. Army Armament Research, Development and Engineering Center, or ARDEC, was developing the actual projectile, Textron officials said.

Now the Army is touting a new 6.8mm round that has an “accurate range far in excess of any existing, known military rifle today,” Army Chief of Staff Gen. Mark Milley said at AUSA on Monday.

Military.com asked the Army to clarify information on the extended range of the new 6.8mm, but Hodne would say only that it “will go beyond 300” meters, the maximum range for M4/M4A1 qualification.

One aspect of the new NGSW program is different from past programs such as the OICW or the XM25. It's the first time Milley, who was sitting beside Army Secretary Mark Esper, said that the service is “committed to a new rifle and a new squad automatic weapon.”

Another difference: Army officials plan to issue these new weapons only to soldiers in infantry and other close-combat units, instead of trying to convince Congress to buy enough to equip more than one million active-duty, National Guard and Reserve soldiers.

Despite the energy behind the effort, the future of the NGSW is still uncertain. Congress did not grant approval for the Army to start the program in fiscal 2019, Potts said.

“Perhaps Congress reconsiders allowing us to start this year. If not, we start next year and that will drive the timelines,” Potts said.