Soldiers will have killer robots, lasers and warp-speed missiles with enough range that the Army could take out enemy navies... 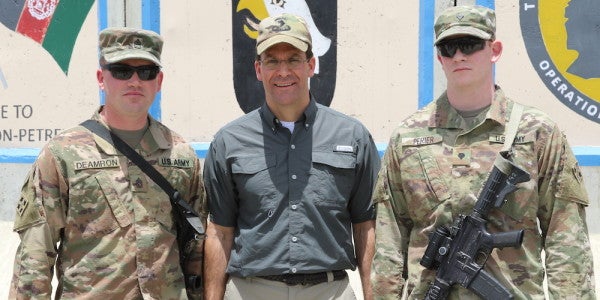 Soldiers will have killer robots, lasers and warp-speed missiles with enough range that the Army could take out enemy navies under a plan outlined Saturday by Army Secretary Mark Esper.

Esper told a crowd on the final day of the Aspen Security Forum that the Army will need the ground-breaking war machines to keep ahead of rivals Russia and China, which are quickly upgrading their Soviet-style militaries into high-tech terrors.

“If we can extend our overmatch in those areas, it will give us a clear advantage on a modern battlefield,” he said.

Since 2001, the Army has focused on tackling insurgents in Iraq and Afghanistan. High-tech weapons programs were canceled to pay for intensive counterinsurgency campaigns that have turned into America’s longest wars.

But with America on the path to withdraw from Afghanistan and ISIS and al-Qaida considered to be on the ropes, the Army is turning toward Cold-War style foes.

Esper said that means replacing the weapons that the Army has hauled to battle since the 1980s, with replacements sought for the M1 tank, Paladin artillery system and even the modern variants of the M16 rifle.

Esper said the future replacements include semiautonomous robots that can roll ahead of the Army on land battlefields, striking enemies without risking American lives.

It’s a philosophy that was echoed at Aspen by John Rood, the Pentagon’s top policy expert. Rood was a key architect behind a new defense strategy rolled out this year under orders from the Trump administration. The new policy recognizes threats from places such as Iran and North Korea, but says Russia and China pose the greatest long-term threats.

“There’s a very clear characterization of the world that a return to great power competition is upon us,” Rood said.

Even as President Donald Trump seeks warmer relations with Russia, the Pentagon remains wary of President Vladimir Putin and the military might he showed off in his invasion of neighboring Ukraine and in escalating military exercises.

“While the fight against violent extremism is going to be with us for a long time, international terrorism isn’t the greatest threat facing the United States,” Rood said.

To address the new competition, all the armed services are ramping up their investments in technology. The Pentagon is also following a Trump directive to create a “space force” to oversee the nation’s satellites.

The space force is moving the slowest. Rood said he expects initial moves on space force planning to come in August after the Pentagon releases a report that Congress ordered last year on the topic.

Esper said he hasn’t even begun to think about how the Army, which houses its 1st Space Brigade in Colorado Springs, will fit into the new space force.

“I haven’t studied the issue,” Esper admitted. “It’s not my focus.”

The Army is studying a new war on the ground that would remind some of “Star Wars” movies. Esper said vehicles like the M-2 Bradley Fighting Vehicle could be replaced in part by dronelike ground robots that could fill the role that cavalry has traditionally maintained.

Esper said the robots would “find and fix the enemy and engage them while the manned forces maneuver.”

Robots are just one piece of the new technology. Rood predicts hypersonic rockets and anti-aircraft lasers will be part of the Army inventory in the coming years. New technologies for ground troops could be on the way even sooner.

Rood said the Army is developing a combat rifle that will allow soldiers to fire from longer ranges. That’s being paired with a new set of night-vision goggles that will incorporate the weapon’s sight and can also be used for virtual reality training.

If this kind of technological push sounds familiar, you probably are flashing back to the 1990s. Then, the Army unveiled its “future combat systems” initiative, which included new vehicles, robots and weapons. That program was slowly killed off after 9/11 when generals found the high-tech gear wasn’t needed against terrorists.

The future combat systems initiative was also a focus for criticism of the Army because billions of dollars were spent with no weapons fielded.

“We have had great success when it comes to equipping our soldiers and we’ve had big failures — we can’t afford to do that anymore,” Esper said.

Esper says the Army’s newest command will help make sure the new push doesn’t meet a similar fate. The Army Futures Command, which will be set up in Austin, Texas, is responsible for the new technologies. Leaders see it as a place that will aid in weapons design while pairing with the nation’s top technology firms to gain advantages on the battlefield.

Esper and Rood characterized the future of war as a battle of engineers and entrepreneurs. Every idea America is pursuing is mirrored by programs in Moscow and Beijing.,

“Whoever gets there first will have unmatched lethality on the battlefield for years to come,” Esper said.