Nearly a half-century after their unit left Vietnam, 10 former members of the 196th Light Infantry Brigade were honored Friday... 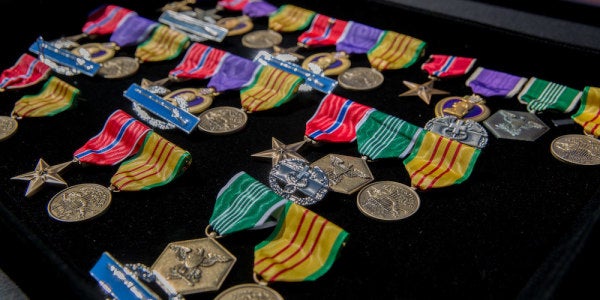 Nearly a half-century after their unit left Vietnam, 10 former members of the 196th Light Infantry Brigade were honored Friday in a ceremony at Fort Shafter, where the graying veterans were pinned with medals, including Silver Stars, Bronze Stars and Purple Hearts, for serv­ice to the nation that went unrecognized years ago.

“It’s never a wrong time to do something right,” said Col. Robert Berg, current commander of the 196th Infantry Brigade.

“For one reason or another, many soldiers were not properly presented their awards and medals at the time,” U.S. Army Pacific said in a release. “Some of these decorations just appeared in the service member’s record, while some were delivered by mail.”

The Army said it wanted to “fulfill its traditional obligation to present these medals.”

The ceremony on Fort Shafter’s historic Palm Circle included a parade of soldiers, a military band and an artillery battery salute to the “Charger Brigade.”

“This is an honor to be at this ceremony because most of us Vietnam veterans when we came back, that was it. No parade, no awards,” former infantryman Orlando Vazquez from San Juan, Puerto Rico, said in an Army news release.

Honolulu resident Allen Hoe, a combat medic with the 196th in Vietnam in 1967-68, received a Bronze Star and Purple Heart.

Former cavalryman Larry Johnson, another Honolulu resident who was also presented a Bronze Star and Purple Heart, said, “This has been a long time coming. I’m glad I was here, in more ways than one. To be honored like I was here today was quite an honor.”

The 196th participated in a number of significant battles and earned citations from both the U.S. and South Vietnamese governments, the Army said. Six with the unit were awarded the Medal of Honor.