Editor’s Note: This article by Oriana Pawlyk originally appeared on Military.com, the premier source of information for the military and veteran community. B-1B... 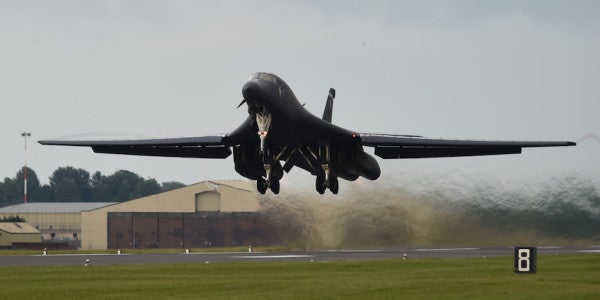 The stand-down of the fleet gave officials time to “thoroughly evaluate the egress components and determine potential risks before returning to flight,” AFGSC said in a release.

Earlier this month the command grounded the fleet over safety concerns related to the Lancer's ejection seats. The stand-down was a result of the emergency landing a Dyess Air Force Base B-1 made May 1 at Midland Airport in Texas.

“We have high confidence that the fleet's egress systems are capable and the fleet is ready to return to normal flight operations,” said Maj. Thomas Bussiere, 8th Air Force Commander, in a statement.

Air Force Secretary Heather Wilson on Monday confirmed speculation that the Dyess B-1 had to make an emergency landing last month after an ejection seat didn't blow.

The B-1 crew “were out training,” Wilson said during a speech at the Defense Communities summit in Washington, D.C.

Aboard the aircraft she said, we an instructor pilot and “a brand-new crew.”

“And the indicator light goes off that they have a fire,” she said. “They go through their checklist of everything they're supposed to do. The next thing on the checklist is to eject….they start the ejection sequence.”

Only “the cover comes off, and nothing else happens,” she said, referring to the weapons systems officer's ejection hatch. “The seat doesn't fire. Within two seconds of knowing that that had happened, the aircraft commander says, 'Cease ejection, we'll try to land.'”

The incident occurred around 1:30 p.m. May 1. Local media reported at the time the non-nuclear B-1B was not carrying weapons when it requested to land because of “an engine flameout.”

Weeks later, images surfaced on Facebook purporting to show a burnt-out engine from the incident. Photos from The Associated Press and Midland Reporter-Telegram also showed the B-1B, tail number 86-0109, was missing a ceiling hatch, leading to speculation an in-flight ejection was attempted.

The back ceiling hatch, which hovers over either the offensive or defensive weapons systems officer depending on mission set, was open, although all four crew members were shown sitting on the Midland flight line in photos.

Unidentified individuals told the popular Facebook group Air Force Amn/Nco/Snco that the offensive weapons system officer attempted a manual ejection, but the ACES II seat did not blow, leading the crew to make an emergency landing instead.

Officials on Tuesday said the investigation into the incident is still ongoing.

Wilson praised the aircrew for their attempts to land while the back-seat airman was sitting on a seat that could still blow with just one bit of turbulence from the aircraft.

“The courage it took and the values represented by that aircraft commander who decided we're going to try for all of us to make it rather than sacrifice the one guy who can't get out. Those are the men and women who choose to wear the uniform of the U.S. Air Force,” Wilson said.

Currently, B-1s are deployed to the Middle East for strike operations and to Europe for a series of summer exercises.