On Saturday, the AG600, the world's largest amphibious airplane, completed its first takeoff and landing on water at a reservoir in... 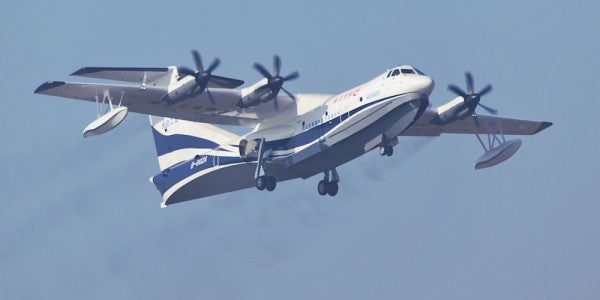 On Saturday, the AG600, the world's largest amphibious airplane, completed its first takeoff and landing on water at a reservoir in China's central Hubei province.

The plane, known as the Kunlong and developed independently by China, took off from the water and landed steadily after a 14-minute flight, according to China's state-owned Xinhua news agency.

Powered by four WJ-6 turboprop engines — Chinese-made versions of a Russian engine — it has a maximum takeoff weight of about 54 tons on land and about 48 tons on water.

It's the third-largest aircraft designed and built in China, after the Y-20 military transport plane and the C-919 commercial passenger plane.

It can carry up to 50 people for maritime search-and-rescue operations and scoop up about 12 tons of water in 20 seconds during firefighting operations.

Beijing approved a development plan for the AG600 in 2009 and unveiled it in July 2016, when it rolled off an assembly line in Zhuhai in southern China. It made its first flight in December and carried out its first on-water tests in September.

Its chief designer, Huang Lingcai, said in May 2017 that the manufacturer, state-owned Aviation Industry Corporation of China, was aiming to get an airworthiness certification by 2021 and start deliveries by 2022.

It's designated primarily for civil operations and intended for the Chinese market. As of December, there had been 17 orders from the Chinese government and Chinese companies.

But its capabilities lead observers to think it could be used to transport troops or conduct surveillance in disputed waters like the South China Sea.

Xinhua has said the aircraft could “be used to monitor and protect the ocean” and called it the “protector spirit of the sea, islands, and reefs.”

The state-owned China Daily newspaper in December described Huang as saying the AG600 could make round trips from China's southern island province of Hainan to James Shoal at the southern edge of the South China Sea without refueling.

Collin Koh, a security expert at Singapore's Nanyang Technological University, told the South China Morning Post in September that “the AG600 would be suitable for the quick transport of troops and materials and could also provide other support such as evacuating garrisons in the South China Sea or even out to the Spratlys.”

Koh added: “Beijing will also use it to justify any further buildup in the region, saying the aircraft can be used for the common good, such as providing support to foreign vessels in the area and for search and rescue.”

China's land-reclamation projects in the South China Sea have helped it expand its presence in the area, which is covered by overlapping claims made by several countries.

Since 2013, China has developed more than 3,200 acres of land in the Spratly Islands. Those efforts have turned to construction.

In addition to building runways, communications facilities, barracks, and hangars, China has militarized several of its outposts in the Spratlys and the Paracel Islands, adding various point-defense systems, jamming technology, anti-ship cruise missiles, and surface-to-air missiles.

Satellite imagery released earlier this year by the Asia Maritime Transparency Initiative showed at least four airstrips in the Spratlys and the Paracels capable of handling military aircraft.

The AG600, which can take off and land in water as shallow as 8 feet, could be used to link those islands.

In early 2016, China appeared ready to start reclaiming land at Scarborough Shoal, a group of rocky outcroppings about 130 miles from the Philippine coast. But it backed down after the U.S. warned of consequences, and the Philippines has since said that building at Scarborough is a “red line.”

Earlier this year, China's air force said it landed bomber aircraft, including the H-6K strategic bomber, on islands in the South China Sea as part of an exercise it described as preparation for “the West Pacific and the battle for the South China Sea.”

aircraft
amphibious aircraft
China
How The Other Half Fights
military tech