Chinese Hackers Are Reportedly Stealing Loads Of US Navy Secrets, And The Navy Is Scrambling To Stop It

U.S. Navy defense contractors and subcontractors have reportedly suffered “more than a handful” of disconcerting security breaches at the hands … Continued 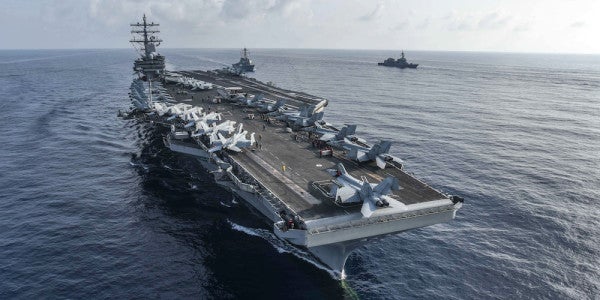 U.S. Navy defense contractors and subcontractors have reportedly suffered “more than a handful” of disconcerting security breaches at the hands of Chinese hackers over the past year and a half.

“Attacks on our networks are not new, but attempts to steal critical information are increasing in both severity and sophistication,” Secretary of the Navy Richard Spencer said in an internal memo in October, The Wall Street Journal, which reviewed the memo, reported Friday.

“We must act decisively to fully understand both the nature of these attacks and how to prevent further loss of vital military information,” he added.

Although the secretary did not mention China specifically, evidence indicates that Beijing is responsible for what is considered a debilitating cyber campaign against the U.S.

China has been striving to boost its naval warfighting capabilities, and there is evidence that it is relying on stolen technology to do so.

And it's not just the U.S. Navy. Adm. Philip Davidson, the head of U.S. Indo-Pacific Command, told the Senate Armed Services Committee in April that Beijing is “stealing technology in just about every domain and trying to use it to their advantage.”

China is believed to have been behind multiple cybersecurity breaches that facilitated the theft of significant amounts of data on the F-22 and F-35, among other aircraft. That information is suspected to have played a role in the development of China's new fifth-generation stealth fighters.

Beijing denies that it engages in any form of cyberespionage.

A senior U.S. intelligence official warned Tuesday that concerning Chinese cyber activity in the U.S. is clearly on the rise, and there is evidence that China is targeting critical infrastructure to lay the groundwork for disruptive attacks, Reuters reported.

And U.S. officials say Chinese state hackers are responsible for a data breach at Marriott affecting 500 million customers, according to recent reports. The Trump administration has repeatedly criticized Beijing for the alleged theft of U.S. intellectual property to the tune of several hundred billion dollars a year, one of several sticking points in the ongoing trade spat.

The breaching of the systems of key U.S. defense contractors are particularly problematic as China modernizes its force, building a military able to challenge that of the U.S.

“It's extremely hard for the Defense Department to secure its own systems,” Tom Bossert, the former homeland security adviser in the Trump administration, told the Journal. “It's a matter of trust and hope to secure the systems of their contractors and subcontractors.”

The most active Chinese hackers are reportedly a group known as Temp.Periscope or Leviathan, which is focused on maritime interests but also hits other targets.

One defense official told the Journal that China was targeting America's “weak underbelly,” calling cybersecurity breaches “an asymmetric way to engage the United States without ever having to fire a round.”

China
cyberattacks
espionage
Hackers
How The Other Half Fights