The Coast Guard Is Going To Train With This Airsoft Gun

U.S. Coast Guard personnel will eventually adopt the Army's new Modular Handgun System alongside their fellow service members in other... 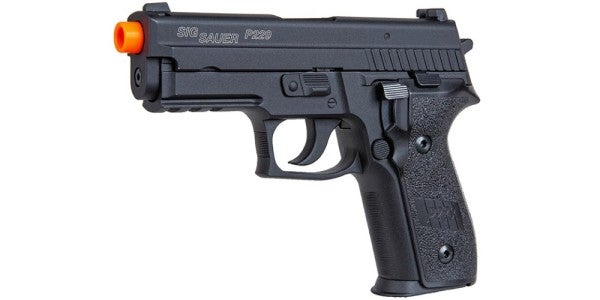 U.S. Coast Guard personnel will eventually adopt the Army's new Modular Handgun System alongside their fellow service members in other branches, but in the meantime, Coasties have a different Sig Sauer sidearm to play with: an airsoft pistol.

The Coast Guard will acquire Sig Sauer's AIR Pro Force P229 airsoft pistol — a ” high-end airsoft pistol designed to be an exact replica in look, weight, balance, and handling” of the P229 .40 caliber pistol currently used by the service — as its training sidearm of choice, the company announced on Nov. 2.

While the acquisition seems to make little sense given the Coast Guard's imminent adoption of the Sig Sauer P320 that came out of the Army's MHS program under the M17 designation, Military.com notes that the service plans on using the airsoft replica of the P229 .40 cal's during simulated training.

“The SIG AIR Pro Force P229 airsoft pistol gives the U.S. Coast Guard’s Cadets and Guardsmen the ability to practice gun handling, conduct target practice in various environments, and train in realistic force on force scenarios with a pistol that has the same look and feel of their issued P229 sidearm.”

According to Sig Sauer, the airsoft pistol uses a semi-automatic firing mode with a gas blowback designed to mimic that of a traditional firearm, geared towards replicating the feel and intensity of a real-world combat situation.

It's not year clear how much the deal cost.