The Marines want to give infantry riflemen the deadliest automatic rifle available, but Congress is holding up the plans, concerned... 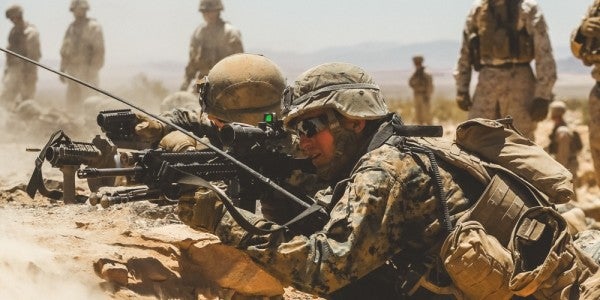 The Marines want to give infantry riflemen the deadliest automatic rifle available, but Congress is holding up the plans, concerned that the Corps and the Army may end up fielding the weapons in completely different calibers.

Over the next five years, the Marines plan to buy 15,000 automatic rifles from the Germans small arms manufacturer Heckler & Koch, which makes the HK 416 that the Corps uses as the M27. Marine Commandant Gen. Robert Neller believes the IAR will make 0311smore deadly on the battlefield. The Corps expects to spend a total of $29.4 million on the IARs.

But a provision in the fiscal 2019 National Defense Authorization Act withholds 20% of that money until the commandant lays out for lawmakers how the Marine Corps plans to update its small arms — and how the purchase of more M27s fits in with the Army’s study on modernizing small arms. Marine Corps Times first highlighted the provision on Wednesday.

Lawmakers want to know if it makes sense for the Marines to purchase automatic rifles that chamber a 5.56mm round, because the Army is testing a weapon that fires 6.8mm rounds to replace the M4 carbine, a congressional staffer told Task & Purpose on Thursday.

The Marine Corps is working to quickly provide lawmakers with the information they need “to satisfy the Congressional requirement and enable full execution of the M27 procurement plan,” said Richard Long, a Corps spokesman.

“The Army and Marine Corps work closely together to achieve common solutions for the majority of small arms capabilities, to include ammunition and fire control,” Long said. “Marine Corps participation in the Army-led Small Arms Ammunition Configuration (SAAC) study that examined optional ammunition configurations for the infantry squad is another example of this close collaboration and will lead to common requirements and materiel solutions for the next generation of squad weapons.”

The Army is testing both a new carbine and an automatic rifle to replace the M249 Squad Automatic Weapon, Brig. Gen. Christopher Donahue, then-director of the Army’s soldier lethality cross functional team, told T&P; in May. Donahue declined to say when the weapons would be fielded, but he said the Army plans to replace the SAW first.

But because the Marine Corps is a maritime service, its needs for weaponry are different than the Army’s, said retired Chief Warrant Officer 5 Christian Wade, former gunner for the 2nd Infantry Division. For example, the M27 can fire after being submerged in water, while M4 carbines can blow up if they get water in them.

The Army can also take at least 10 years to field new weapons, while the M27 is available right now for infantry Marines, he said. And some of the Army’s ideas for weapons end up being abandoned, such as the 7.62mm interim rifle, he said.

To Wade, Congress’ decision to withhold 20% of the funding for the IARs makes no sense.

“It’s frustrating to me that they would go: ‘OK, we’re going to let you buy 80%. That’s fine. But we’re going to withhold 20% and let 20% of your riflemen not have that fine rifle,’” Wade said. “What the hell? That does not suggest to me that the motive behind withholding that money has anything to do with warfighting.”