The Air Force Retired Its First Stealth Aircraft More Than A Decade Ago, But It’s Still Lurking In The Skies Over The US

On July 26, two stealth aircraft were spotted taking off at the remote Tonopah Test Range in southwest Nevada, with one … Continued 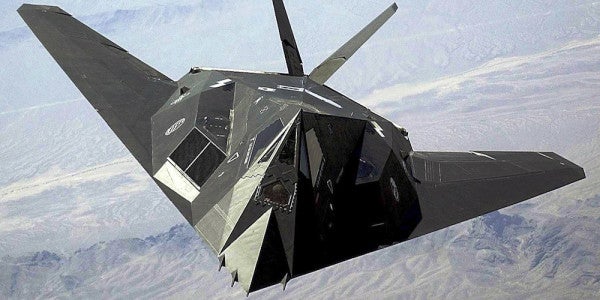 On July 26, two stealth aircraft were spotted taking off at the remote Tonopah Test Range in southwest Nevada, with one lingering over the base while the other appeared to head south.

Two stealth aircraft operating out of the secretive Tonopah base isn't out of the ordinary. In this instance, however, the two aircraft in question appeared to be F-117 Nighthawks — planes that were retired more than a decade ago.

The technology for the F-117 was developed in the 1970s, and the first F-117 unit reached initial operating capability in October 1983, becoming the first operational, purpose-built stealth aircraft.

It was designed to attack high-value targets without being detected. It could carry 5,000 pounds of internal payload, and two engines could push it to 684 mph. The plane, which took part in the invasion of Panama and the first Gulf War, was renowned for its precision.

“It was the marriage of the GBU-27 to the F-117 that had a laser designator in its nose that made it such a precise, deadly platform,” former F-117 maintainer Yancy Mailes said in an Air Force release marking the 10th anniversary of the plane's retirement, referring to a guided bomb. “It was best demonstrated during Operation Desert Storm when pilots snuck into Iraq and dropped weapons down the elevator shaft of a central communications building.”

An F-117 Nighthawk flies over the Nevada desert in 2003. The unique design of the single-seat F-117 provides exceptional combat capabilities. The fighter can employ a variety of weapons and is equipped with sophisticated navigation and attack systems integrated into a digital avionics suite that increases mission effectiveness and reduces pilot workload.

While the plane was designed to elude detection, one was shot down by Yugoslavian air defenses in March 1999. The pilot bailed out and was rescued within hours, as enemy forces closed in.

After 25 years in service, the Air Force retired the F-117 on April 22, 2008. But the story didn't end there. An Air Force official told Military.com in September 2017 that the service got permission to retire 52 Nighthawks but wanted to maintain them in case they were called back into service.

Rumors that the plane was still in flight continued for years. In late 2014, The Aviationist published photos showing F-117s in operation at Tonopah. It was suspected that the planes were being used for some kind of testing.

When asked by Defense News, the Air Force said a few weeks later that the Nighthawk was retired. Sort of.

The aircraft were being kept in Type 1000 storage, meaning they were being maintained in case they needed to be recalled to active service. That meant keeping them in their “original, climate-friendly hangars” at Tonopah, rather than building new storage facilities for them elsewhere, the Air Force said at the time.

In accordance with the Type 1000 program, or “flyable storage,” the service added, “some F-117 aircraft are occasionally flown.”

In October 2010, footage emerged that appeared to show the aircraft flying near Groom Lake Air Force Base, which is part of Area 51, and near Tonopah Test Range.

Four years on, the shadowy Nighthawk is still seen skulking through the sky over the American West.

About six F-117s are kept in flyable condition at any one time, according to The War Zone , which reported that the planes are likely flown by contractors. That may be why there haven't been official references to the Nighthawk's activities, which may involve testing of low-observable technology.

Two Nighthawks were spotted flying together over Nevada in July 2016. In November 2017, what appeared to be an F-117 was spotted being hauled under cover on a trailer near Creech Air Force Base in Nevada. The next day, an F-117 was observed in flight north of Rachel, Nevada, being chased by a two-seat F-16 in what may have been a test of some kind of anti-stealth technology, The Aviationist said at the time.

But the Nighthawk's time may finally be nigh.

Related: Did the Pentagon Just Admit Stealth Technology May Not Even Work Anymore? »

According to the 2017 National Defense Authorization Act, the Air Force is to remove four F-117s from service every year, a process known as demilitarizing aircraft, a service official told Military.com in September.

“We had to keep all the F-117s in flyable storage until the fiscal '17 NDAA gave us permission to dispose of them,” the official said.

It will be some time before the last F-117 leaves the flight line for good, and the expense of keeping them maintained in a museum may be prohibitive, meaning the Air Force could scrap them outright, according to The War Zone. But some vestiges of the Nighthawk may live on.

“It was a unique experience,” retired Col. Jack Forsythe, who first flew a Nighthawk in 1995 and led the final formation flight in 2008, saidearlier this year. “It's probably the same feeling that a lot of our (single seat) F-22 (Raptor) and F-35 (Lightning II) pilots feel today.”