The F-35 Joint Strike Fighter may be named the “Lightning II” in homage to two of Lockheed Martin's World War II-era... 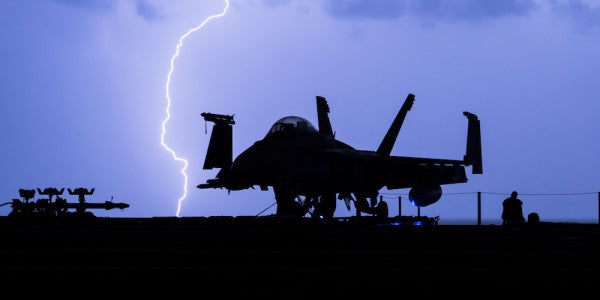 The F-35 Joint Strike Fighter may be named the “Lightning II” in homage to two of Lockheed Martin's World War II-era aircraft, but it turns out at least one variant can't actually handle the lightning at all.

In early August, the Marine Corps put out a solicitation for portable lightning rods to draw lightning strikes away from the branch's F-35B aircraft current parked at Marine Corps Air Station Iwakuni in Japan.

“Since the F-35 as a composite type aircraft does not provide inherent passive lightning protection, the lightning rods being requested are needed for deploying aircraft to any expeditionary airfield in support of combat operations or training exercises that do not support all lightning protection requirements for the F-35B,” the Marine Corps says in its justification or the purchase.

According to the Pentagon's annual intensive assessment of the F-35 program, conducted by the Office of the Director of Operational Test and Evaluation and published in January, Lockheed Martin is currently testing new lightning protection capabilities for the designed to appropriately protect the aircraft's vital Autonomic Logistics Information System (ALIS) from the sudden surge of a lightning bolt.

The War Zone, which first identified the Marine Corps solicitation last week, has the details of the specific lightning rods if you're into that sort of thing, as well as the new protections that Lockheed's whipping up to keep the ALIS secure from outside shocks. But more importantly, The War Zone notes that the F-35's fuel system poses a unique risk of, well, combustion:

Combined with the aircraft’s lack of inherent lightning strike protection, it is difficult and complicated to make the fuel system “inert” once the plane is on the ground.

What this means is that there is a distinct potential for a build-up of both oxygen and fuel vapors inside fuel tank that could be dangerous by itself. If a bolt of lightning were to hit a non-inert plane on the ground, there could be an increased risk that it would set off an explosion or cause a fire.