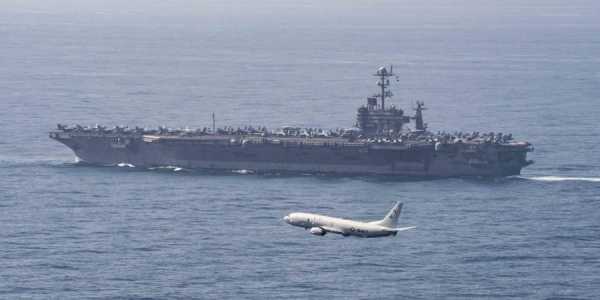 “In some parts of the world, we do armed patrol and escort for our carriers,” US Navy Capt. Erin Osborne, the commodore for Wing Ten who oversees training, manning, and equipping of Navy P-8A squadrons, told Insider recently, explaining that if there are submarines out there, “we want to know that.”

Rivals are challenging American military advantages through increases in undersea warfighting capacity and capability, “but we're keeping right up with them,” Osborne said, pointing to the relatively new P-8 as a key increase in lethality. “I think we are staying ahead of the threat.”

Crewed by a team of nine, US Navy P-8 Poseidon maritime reconnaissance and anti-submarine warfare aircraft are built to find enemy submarines. The Boeing P-8s are militarized 737-800ERX aircraft equipped with sensor systems and armed with torpedoes for tracking and, if necessary, engaging undersea threats. The aircraft, which was only introduced about seven years ago, also carries anti-ship weaponry.

'The eyes and ears of the fleet'

Successor to Lockheed's P-3 Orion, the P-8 provides advanced maritime intelligence, surveillance, and reconnaissance capabilities and is among the best sub hunters in the world.

The Navy has described the P-8 as “an extension of the eyes and ears of the fleet,” as this aircraft, unlike some other anti-submarine warfare assets in the US arsenal, is uniquely suited to conducting sweeping patrols that cover large swaths of open ocean and track down possible threats to a ship beyond its horizon.

The Navy's land-based P-8s operate at higher altitudes and have a longer range than the anti-submarine warfare helicopters that are sometimes tied to ships at sea. The P-8s capabilities also give it certain advantages over US attack submarines — among the Navy's most important undersea warfighting assets.

While the P-8 is equipped to defeat independently — or in coordination with other assets — a potential enemy's submarines, Osborne stressed that “we're not flying around prepared to drop torpedoes all the time.”

The Navy uses its P-8s flexibly for more than just patrols, submarine hunting and overwatch. They are also used for drug interdiction missions, collecting intelligence, and carrying out search and rescue operations, with each mission having its own unique aims and demands.

For carrier strike group support missions, the main goal is situational awareness and threat detection. “We always want to be aware,” Osborne said.

While an adversary could use missiles to cripple a carrier, “if they really wanted to sink the carrier, they might to turn to torpedoes,” Bryan Clark, a former US Navy officer and defense expert at the Center for Strategic and Budgetary Assessments (CSBA), previously told Insider.

The Navy's carrier strike groups have relatively robust missile defense capabilities, but are much less prepared to counter torpedoes. “Torpedo defense is hard, not really perfected, and so they actually end up being the more worrying threat,” he said.

Last month, the Dwight D. Eisenhower Carrier Strike Group conducted a three-day anti-submarine warfare drill training US Navy forces to protect ships in transit and defend against submarine threats in chokepoints. During the exercise, a P-8 from the “War Eagles” of Patrol Squadron 16 provided airborne maritime patrol and reconnaissance support.

'Finding a needle in a haystack'

Finding enemy submarines in a real-world situation is, as one Navy official told Insider, like “finding a needle in a haystack.” Sometimes the P-8 crew works off of intelligence; other times, they are conducting an open-ocean search.

Anti-submarine missions can involve a lot of figuring out where an enemy is not and then closing in on the target, like playing the classic board game of Battleship, except in this case, your opponent can see both sides of the board.

“I personally think that our ASW [anti-submarine warfare] mission is our most exciting mission,” Osborne explained, calling the hunt both “an art and a science.”

“How does an airplane up in the sky find a submarine under the water? We have sonobuoys that we drop in the water, and the sonobuoys talk to the plane,” she said, explaining that a sonobuoy is essentially a hydrophone. “So, a microphone goes into the water and we listen for the submarine as it passes information back to the aircraft.”

A sonobuoy dropped from a P-8A deploys a float when it strikes the water, sending its sonar system lower into the water column. Passive systems act as these underwater microphones while active systems send sonic pings into the water that bounce off objects. These returns are then transmitted back to the P-8A for assessment, and with sonar from nearby ships and submarines can paint a picture of where an adversary's sub lurks.

Without going into the geometry, she explained that “you can figure out where they might be based on the sounds that you hear.” Basically, the aircraft drops an array of sonar listening devices down in the water that allow the crew to zero in on a sub's position.

It takes more than just the technology to get the job done though, Osborne said. “We have got the technology on the aircraft, we understand how the buoys work, and there's a manual with recommended tactics, but at the end of the day, there's a bit of an art to it as well,” she said, adding that it is impossible for any one person to do the mission alone.Each P-8 aircrew has three pilots, a tactical coordinator, a co-tactical coordinator, two acoustic operators, and two electronic warfare operators.

“The pilots put the plane in the right place. The tac decides where the buoy drops. The sensor operators are listening and processing the buoys. It's a team effort to say this is where we think the submarine is,” Osborne said.

“Based on our experiences, based on what our processors are telling us, and based on what we know about the tactics of the target, we think the submarine is over here,” she said. “Then we take the plane over there, put another buoy in or fly another pattern.”

All that hard work does not always pay off, but when it does, Osborne said “it is always satisfying to find a submarine.”

She noted though that they are not hunting subs for fun. “This isn't a flying club,” she said. “We're out there doing missions every day, and we're doing it for the safety and security of the nation.”