Japan is apparently considering tripling its original F-35 order “to respond to China in the Pacific,” a senior defense official... 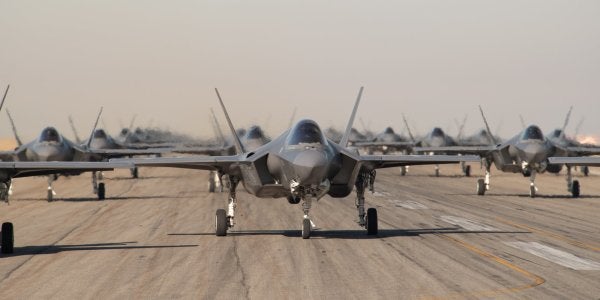 Japan is apparently considering tripling its original F-35 order “to respond to China in the Pacific,” a senior defense official in the Japanese parliament revealed Wednesday.

Japan plans to purchase as many as 147 F-35s to replace Japan's aging fleet of F-4 and F-15 fighters, as well as significantly enhance the combat capabilities of Japan's maritime forces, Keitaro Ohno, parliamentary vice minister of defense for Japan's ruling party, explained Wednesday, confirming rumors that have been circulating for weeks.

One hundred and seven F-35As will replace Japan's older fighters, while 40 F-35Bs will serve aboard the Izumo, a flat-topped helicopter destroyer that Japan plans to convert into an aircraft carrier. The ship is similar in size to the USS Wasp, a US Navy amphibious assault ship that has been used to launch F-35 stealth fighters, according to the Military Times.

In actuality, the Izumo-class destroyers will not become true aircraft carriers; rather, they will serve as aircraft-carrying “multipurpose escort ships,” the Japanese defense ministry revealed, attempting to skirt violations of the country's pacifist constitution as it strengthens its armed forces.

The “Self Defense Forces in the past were existence. Existence can have a strong deterrent,” Ohno told reporters. “Now, we have to meet the real situation. We have to respond to China in the Pacific.”

Japanese Prime Minister Shinzo Abe has been adamant about the need for Japan to expand its military capabilities.

“The most important responsibility of the government is to protect the people and their peaceful lives,” he told a panel of security experts Tuesday. “Under the drastically changing security environment, in order to duly fulfill this responsibility, we have to fundamentally strengthen our preparedness to protect the people's lives, property, territorial waters and airspace on our own.”

Beijing has been critical of Japan's rearmament interests. The state-backed Global Times called Japan's desire to refit its helicopter destroyers to carry stealth fighters “an aggressive move” that “may drive the country to repeat its militaristic history.”