On May 20th, an Air Force KC-10 aerial refueling tanker performed an emergency abort during take-off at Joint Base McGuire-Dix-Lakehurst... 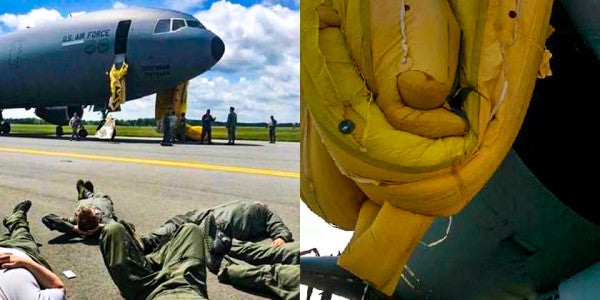 On May 20th, an Air Force KC-10 aerial refueling tanker performed an emergency abort during take-off at Joint Base McGuire-Dix-Lakehurst after the aircraft experienced a fire, smoke, or fumes incident, according to Military.com. Once the aircraft came to a halt, the crew performed emergency egress procedures to evacuate the stricken aircraft, only to discover that both emergency slides had failed to properly deploy, stranding them until firefighters could extract them via ladder truck.

While the KC-10 can have up to four escape rafts, one for each hatch fore and aft, the airframe involved in the incident was in ‘Bravo Configuration,’ which meant that the two forward slides were the only options available — a glitch that could have proven disastrous under other circumstances.

From the photos posted on Air Force Forum, it appears that one slide did partially inflate. But had the crew needed to exit the aircraft quickly, they would have been forced to use the flight deck escape ropes. This method, besides being more hazardous than a slide, would put the crew at risk from the sharp pitot tubes and antennas that litter the fuselage.

“The KC-10 has three escape ropes for emergency egress that aircrew are trained on,” said Col. Christopher Karns, a spokesman for Air Mobility Command, adding that the crew was able to forgo the escape ropes anyway because a fire truck was already on the scene.

This isn’t the only KC-10 to experience issues with aircraft evacuation mechanisms: the Air Force told Task & Purpose that the same issue has been discovered on two other KC-10s: One tanker was at Travis Air Force Base in California and the other tanker from McGuire Air Force Base, New Jersey, was in depot at the time.

An engineering team is investigating the issue and should have a better idea of what is causing the malfunctions as early as next week, Karns said. In the interim, AMC is reducing Space-A flights on KC-10s.

While another evacuation mechanism issue recently ended up grounding the Air Force’s entire B-1B fleet, AMC has no plans to ground the entire fleet of KC-10s because aircrews have been trained how to get out of the tankers using the rescue ropes, Karns said. But with militaryaviationwoesappearingateveryturn, is this one more canary in the coal mine?