The Marine Corps Is Looking For A Taser Bullet

A bullet that zaps you with an electric jolt like a Taser. That’s what the U.S. Marine Corps wants as a … Continued 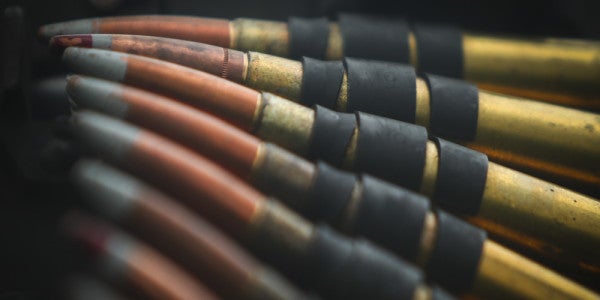 A bullet that zaps you with an electric jolt like a Taser.

That’s what the U.S. Marine Corps wants as a non-lethal munition that can be fired from a regular small arm. The U.S. military has been trying to develop a Taser-like bullet for twelve years but has yet to succeed. This time, the Marines hope to get it right.

The U.S. military already uses regular X-26 Tasers, pistol-like devices that fire two wired electrode darts that transmit a jolt to incapacitate a target. But not surprising for a device designed for civilian police forces, the wires limit an accurate shot to less than twenty-five feet, and the target is disabled for only about five seconds.

That’s good enough for a cop to subdue a criminal, but not for soldiers on a battlefield.

The Marines want a wireless human electro-muscular incapacitation (HEMI) round with a range of at least 100 meters (328 feet), and that can incapacitate a target for a minimum of thirty seconds, and ideally more than three minutes. It must be able to penetrate materials, such as cloth and leather, and attach to the human body.

The bullet would only deliver a jolt of around 50 Coulombs (a measure of electrical charge), compared to approximately 100 Coulombs for commercial incapacitating devices. However, because the HEMI round wouldn't be attached to electrical wires and an outside power source, it needs a tiny but powerful battery that can fit inside a bullet-sized munition.

As expected for a weapon designed to stun rather than kill, safety is a consideration. The HEMI round should have a minimum safe distance of at least five meters (sixteen feet), with a velocity slow enough not to injure the target. The bullet also should cost less than $1,000 per round.

More interesting is that the HEMI round must be fired from conventional small arms. The Marine research solicitation mentions as “acceptable calibers” 9-millimeter pistols, 12-gauge shotguns and 40-millimeter grenade launchers. This means a HEMI munition that can survive the intense acceleration of being fired from a military firearm.

The first phase of the project is to devise a conceptual design that meets these requirements, followed by a prototype. The goal is a non-lethal weapon useful not just for the Marine Corps, but also “the joint services, civilian law enforcement, the Department of Homeland Security, Department of State, Department of Justice, the Secret Service, and Customs and Border Protection.”

Taser bullets aren’t exactly a new concept. Commercial manufacturers have developed HEMI rounds for 9 mm and 12-gauge police firearms. For instance, in 2011, Taser was developing a 40 mm millimeter grenade round that sounds similar to what the Marines want.

A slide from the DoD's 2011 HEMI weapons program

Curiously, the U.S. military hasn’t been as successful. “At least four previous DoD-sponsored SBIR [Small Business Innovation Research] efforts have been initiated on this technology area, with the previous efforts being funded by both the Army and the Navy, and were coming to completion over 12 years ago,” according to the Marines. “Each of these previous SBIR topics added to the knowledge-base for this technical challenge but none led to the development of an effective HEMI munition that met the JNLWP [Joint Non-Lethal Weapons Program] capability gap.”

Perhaps this is because a military Taser bullet isn’t as easy as it sounds. A police Taser jolts for just five seconds, yet a Reuters investigation found that more than 1,000 people have died fully or partly from Tasers. The Marines want a weapon that can incapacitate for more than three minutes, which suggests a fine line between enough jolt to stun and enough to kill. Furthermore, the target might be wearing body armor that the HEMI round must penetrate. And a bullet powerful enough to travel more than 300 yards but not injure the target through blunt force might be a challenge.