The U.S. military has spent millions of dollars on the standard Blue Force Tracking system to boost the situational awareness … Continued 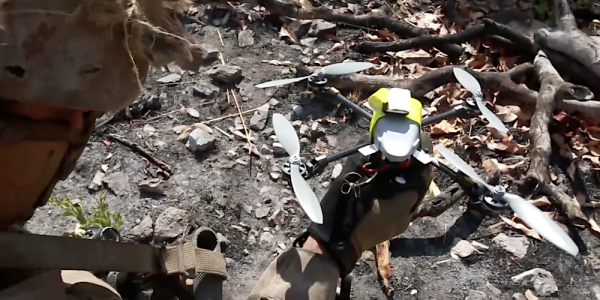 The U.S. military has spent millions of dollars on the standard Blue Force Tracking system to boost the situational awareness of warfighters downrange, but strap a reflective belt on an unmanned drone and bam: improved awareness at a fraction of the cost.

A group of Marines participating in Koolendong 2018 with Australian Royal Marines as part of Marine Rotational Force-Darwin are apparently experimenting with using the reflective belt, the much-maligned staple of warfighting in the Global War on Terror, as an additional visual marker in the rugged Australian outback.

In a Marine Corps video first spotted by our eagle-eyed friends at Marine Corps Times, Marines conducting live-fire training at the Mount Bundey Training Area wrapped their reflective belts around the Instant Eye hand-held unmanned quadcopter drones adopted by the Corps for reconnaissance support in “tightly-confined spaces” like urban neighborhoods and jungles.

The larger goal of adopting the hand-held quadcopter, the Corps stressed during testing in February 2017, was to “greatly diminish the need to send Marines into possibly hostile areas without knowing key factors beforehand, such as the number of enemy troops or equipment.”

But in this case, the jury-rigged quadcopters are adding an extra layer of lethality for warfighters by helping focus accurate fire in less-than-ideal terrain.

“What we had done was strap a glow belt around the Instant Eye,” says 2nd Battalion, 4th Marines squad leader Cpl. Elias Isenhower in the video. “That way guns could see our lead trace while we were maneuvering down in the maneuver box during the live fire.”

This MacGyvered solution may see applications beyond the Australian outback. The Corps had already issued around 600 Instant Eye quadcopters as part of its “Quads for Squads” situational awareness program for warfighters before Pentagon concerns over cybersecurity halted new purchases of the drone back in May.

But even if these modified quadcopters don’t become staples of the newly-reinvigorated Marine squads, it’s still a fantastic example of Marine ingenuity in the field, right up there with the Marine corporal who realized that a pricey electronic cable shouldn’t cost $64,000 and likely saved the Corps millions. Let’s just hope the Russians don’t catch on.