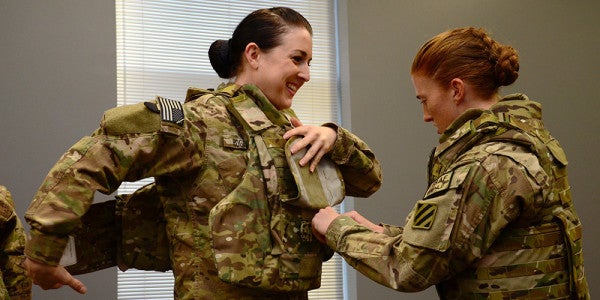 As women enter ground combat fields in larger numbers, the military services are working harder to make gender-specific accommodations for their gear — even down to tweaking protective equipment to fit around longer hair.

According to presentations prepared by the Army and the Marine Corps for the Pentagon's Defense Advisory Committee on Women in the Services, both services are making independent changes to ensure gear fits correctly for women with hair buns.

A presentation prepared by Army Lt. Col. Ginger L. Whitehead, product manager for Soldier Protective Equipment, shows a recently introduced version of the Female Improved Outer Tactical Vest, or FIOTV, includes a yoke-and-collar assembly that dips in the back to accommodate a hair bun, along with other fit improvements to offer better ballistic protection for women.

Feedback from soldiers is also leading to helmet improvements, the presentation shows.

Women in uniform complained that the “X-Back” design of the apparatus holding the chin straps interfered with hair buns, making it difficult for the helmet to fit securely on the head, with the straps in the proper places. According to the presentation, the Army is introducing a female-specific “H-Back” apparatus that includes an opening for a bun.

This solution, along with improvements to retention straps to keep them from interfering with peripheral vision and cutting into earlobes, was “widely accepted by female soldier community,” the presentation showed.

A number of recent improvements to the Army's body armor design have come through the human factors evaluation process, in which female soldiers provide feedback and critiques on their own personal protective equipment and test out new gear.

“Often, these HFEs compare new equipment and legacy systems side by side in a counter-balanced test design,” Whitehead's presentation stated. “Testing personnel measure all Soldiers participating in user assessments and operational tests to determine their individual percentile rankings for various body dimensions and to initially size and fit the tested equipment.”

The Army began these research efforts in 2010.

The Marine Corps, which began an effort to expand the size range of its stock of personal protective equipment as infantry fields opened to women in 2016, now aims to fit all Marines from the 2nd percentile of female troops to the 98th percentile of males. Previously, gear only had to fit the 5th to 95th percentile of men. The change means another 8,856 smaller-stature and 5,711 larger Marines will get gear that fits, according to a presentation for DACOWITS from Lt. Col. Chris Madeline, the Marine Corps' program manager for Infantry Combat Equipment.

The Corps' new Enhanced Combat Helmet, which is set to begin fielding this spring, has design features that better accommodate the hair bun, according to the presentation.

The Plate Carrier Generation III system, which is currently in the design and contracting process, is shorter and 25 percent lighter than its predecessors, with a more modular fit, according to the slides.

The Marines are also working on an improved adjustable pack frame designed to fit better around body armor and offer better fit options to cover a range of sizes.

For services in which women have historically had to contend with protective equipment designed for men that often left them contending with gaping armholes and too-long torsos, even small adjustments, like room for hair buns, represent progress.

The Army and Marine Corps are not the only male-dominated services with blind spots in this area. Just last year, the Navy changed a policy governing how to wear ball caps that allowed women with long hair to wear them comfortably for the first time.

So far, the Army and Marine Corps have opted to expand size range and improve fit for the primary body armor vest and protective plates, rather than to design a full range of gender-specific protective gear.

In 2017, Lt. Col. Kathy Brown, then-product manager for soldier protective equipment at PEO Soldier, told Military.com that research had shown that form-fitting protective plates for women created their own fit challenges, and the Army had ultimately determined that it was not the best approach.

That answer, however, does not satisfy everyone.

“Men would be the first to cry out that the military adapt appropriate body armor … to them if it was first designed for women,” said Carbajal, who served in the Marine Corps as a mortarman and left the service as a sergeant. “It's really important that we provide the same appreciation and support for female soldiers and Marines that we do for men … as a Marine myself, I find it does not correlate to the values of the institution.”

This story first appeared on Military.com.