Why The US Military Still Loves Shotguns In A Firefight

One of the most popular civilian firearms, the shotgun, also has a role as a military weapon. Originally designed as... 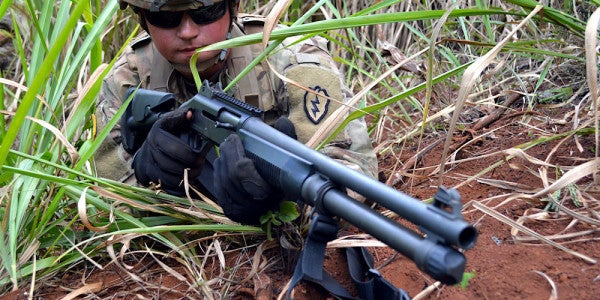 One of the most popular civilian firearms, the shotgun, also has a role as a military weapon.

Originally designed as hunting weapons, many armies turn to shotguns for a variety of roles, including close combat and obstacle breaching. Although shotguns are too specialized to replace battle and assault rifles in infantry units, their utility will keep them in arsenals worldwide for the foreseeable future.

Shotguns are big bore long guns designed to hunt fast-moving birds and small game. In order to maximize hit potential, shotguns typically fire a cartridge filled with metal shot. Instead of a single bullet, shotguns eject tiny balls of shot in a set pattern covering a wider area. The most common shotguns, 12 gauge shotguns, have barrel diameters of 18.5 mm (as opposed to 5.56 mm for the M4A1 carbine) and pack one twelfth a pound of shot. Alternately, instead of shot pellets a shotgun can fire solid lead slugs.

Shotguns are not terribly suited to combat: shotgun shot has a maximum effective range of thirty yards, at which point velocity and predictable shot groupings quickly decline. Solid slugs are useful out to a maximum of one hundred yards. As a result, shotguns are ineffective during combat in rolling terrain, with sight lines out to four hundred yards or more.

Combat, however, takes place over a variety of terrain and circumstances, some of which are very suited to shotguns. One of the first instances of shotguns used in warfare were so-called “trench” shotguns used during World War I. Shotguns could be fired down the length of a narrow trench, each pull of the trigger unleashing a hail of shot more likely to hit enemies than a single bullet from a bolt-action rifle.

The U.S. military was the only major power to use shotguns in World War I, issuing a modified Winchester Model 1897, known officially as the Model 1917 Trench Shotgun. (Remington Model 12 and other commercially available shotguns were also issued to the American Expeditionary Force.) The so-called “trench gun” version of the 1897 shortened the barrel to make it easier to wield in close quarters and added a heat shield to prevent accidental handling of a hot barrel.

The German government decried the use of shotguns as inhumane, stating, “The German Government protests against the use of shotguns by the American Army and calls attention to the fact that according to the law of war, every U.S. prisoner of war found to have in his possession such guns or ammunition belonging thereto forfeits his life. This protest is based upon article 23(e) of the Hague convention respecting the laws and customs of war on land.”

The acting Judge Advocate General for the U.S. Army denied the claims, stating that the shotgun was a legitimate weapon of war. Observers also noted more than a little hypocrisy in Germany’s complaints about shotguns during the same war it invented flamethrowers and poison gas. Despite threats to execute U.S. troops captured with trench guns, none were ever killed.

Military shotgun use during World War II was rare, mostly limited to U.S. forces fighting in the Pacific against Japanese bunkers and earthen fortifications. A big standout in non-American shotgun use came after World War II during the Malaya Emergency, when British forces fought guerillas in the jungle with semi-automatic shotguns. U.S. forces were issued small numbers of shotguns here and there in the Vietnam War, with shotguns most common among clandestine reconnaissance Teams. Marine infantry troops were issued the M1912 riot gun , a 12 gauge patterned after shotguns used to quell prison riots.

Shotguns became increasingly common among U.S. combat troops at the tail end of the Cold War, as the threat of terrorism moved combat into urban areas, aboard oil rigs, ships, and aircraft. Shotguns were issued to special operations forces, ship crews, boarding parties, and U.S. Marine Corps Fleet Anti-terrorism Security Teams. The U.S. Army’s Delta Force fielded a cut-down pump action shotgun fitted underneath the barrel of an M16 pattern rifle. Nicknamed “the Masterkey” , the shotgun was used as a breaching tool to fire solid slugs point-blank against door locks.

Related: When Exactly Should You Use A Shotgun? Check This Gritty 1970s Police Training Video »

Today shotguns are still part of U.S. and NATO arsenals. The U.S. Marine Corps fields both the Mossberg 500 series pump shotgun , 590 series shotgun, and M1014 semi-automatic shotguns . The U.S. Army, is replacing Mossberg 500 series shotguns with the new M26 Modular Accessory Shotgun System, or MASS . A bolt action, magazine fed shotgun, the M26 can be used along with a shoulder stock or attached under the barrel of an M4 carbine. Even the German Army has done an about-face on shotguns, issuing the Remington 870 Police Magnum to airborne engineer and special operations troops.

Military shotguns are an invaluable part of twenty-first-century arsenals. As limited as the shotgun is, it can do things traditional military firearms cannot. The military shotgun can bust doors, destroy obstacles, cow prisoners of war, deploy tear gas, and unleash a devastating pattern of lead shot with a single pull of the trigger. Until the day these missions go away, shotguns are here to stay.