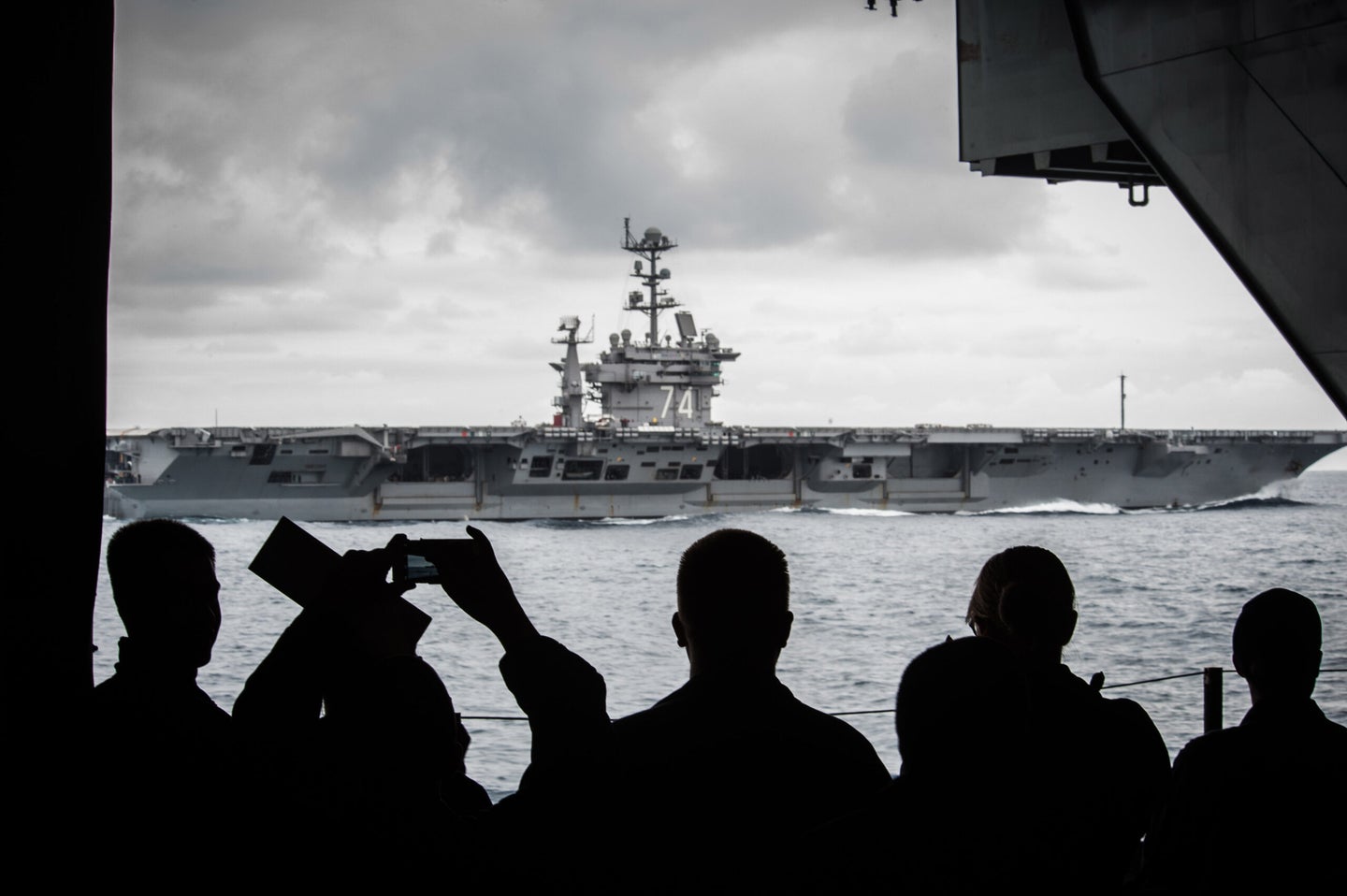 Few weapons have made an impact on warfare like the aircraft carrier. Just a few decades after the first purpose-built carrier was commissioned by the Japanese in 1922, they became essential instruments of naval warfare.

U.S. carriers played pivotal roles in World War II naval battles and in nearly every war or conflict the U.S. has been involved in since.

“When word of a crisis breaks out in Washington, it’s no accident that the first question that comes to everyone’s lips is: ‘Where’s the nearest carrier?'” President Bill Clinton said on the deck of the USS Theodore Roosevelt in 1993.

With decades of hard experience, the U.S. Navy has mastered carrier warfare, fielding some of the most impressive vessels in history.

The first operational class of carrier was the Lexington class.

Both ships of the class, Lexington and Saratoga, were intended to be battlecruisers but were converted after the Washington Naval Treaty of 1922, which limited the number of battleships and cruisers the US Navy could have. They were 880 feet long, had a crew of over 2,000, and could carry up to 90 aircraft.

They were also originally fitted with eight 8-inch guns in four turrets in front of and behind the carrier island, because early carrier doctrine dictated that aircraft alone were insufficient armament.

The two ships were commissioned in 1927. They were two of three carriers in the Pacific Fleet when Pearl Harbor was attacked but, luckily, were at sea and avoided being destroyed.

Both saw action in the Pacific. Aircraft from Lexington helped sink the Japanese carrier Shōhō and prevent a Japanese invasion of Port Moresby at the Battle of the Coral Sea, but it was scuttled after sustaining too much damage.

Saratoga saw action at the Battle of the Eastern Solomons, where its aircraft sank the carrier Ryūjō. It served in four campaigns and was damaged at the Battle of Iwo Jima. After the war, it was sunk as a target ship during the Operation Crossroads atomic bomb tests at Bikini Atoll in 1949.

The U.S. Navy’s first purpose-built carriers were the Yorktown class. It had three ships: Yorktown, Enterprise, and Hornet. They were over 800 feet long, had a crew of 2,900, and could carry 80 to 90 aircraft.

The Yorktown class is famous for bearing the brunt of U.S. carrier action during the early months of World War II — part of Enterprise’s air group was present at Pearl Harbor during the attack and engaged Japanese aircraft, and it was the ship that carried the Doolittle Raid bombers to Japan.

Enterprise fought in almost every major action of the Pacific and became the most decorated U.S. ship of World War II. Its planes and guns shot down 911 enemy planes, sunk 71 ships, and damaged 192 more.

The backbone of the US Navy

After the Washington Naval Treaty expired in 1936, the U.S. Navy set about building more modern carriers. The result was the Essex class, the lead ship of which entered service in 1942.

Due to the demands of World War II, “short-hull” and “long-hull” versions of Essex-class carriers were built, and many were modified and refitted throughout the war.

Essex-class carriers became the backbone of the U.S. Navy’s strength during the war. Twenty-four were completed in total — more than any other capital ship in the 20th century — and they saw action in almost all major naval battles of the Pacific.

Although none were lost, some took massive damage. USS Bunker Hill and USS Franklin, for instance, suffered kamikaze and air attacks that killed 390 and 800 crewmen, respectively.

The carriers were used long after World War II and were constantly upgraded and modified. Some were given angled flight decks and the ability to carry jets. A few carriers even served in Vietnam. The last Essex-class carrier, used as a training ship, was decommissioned in 1991.

The dawn of the jet age meant a new type of carrier was needed — one that could carry large numbers of jets and operate for extended periods in support of operations inland. The Midway-class achieved this in some respects but still had to be upgraded to meet demand.

The answer was a new generation of vessels known as “supercarriers,” an unofficial designation often given to carriers of this era and those that followed.

Four types of supercarriers have seen action with the U.S. Navy: the Forrestal class, Kitty Hawk class, the Enterprise class, and the Nimitz class. All were over 1,000 feet long and crew sizes from 4,300 to over 5,000.

All were built with angled decks and four steam-powered catapults, which allowed them to launch jets with heavier payloads as well as larger reconnaissance and transport planes. Instead of naval and anti-aircraft guns, they were armed with anti-air missiles and Phalanx Close-in Weapons Systems, or CIWS, capable of firing 4,500 20-mm rounds a minute.

They could hold anywhere from 60 to 90 aircraft including helicopters, and, more recently, drones.

In 1961, the USS Enterprise, the only ship of its class to be built, entered service with the Navy. Powered by nuclear reactors, Enterprise revolutionized carrier design.

As a result of its success, the following Nimitz-class carriers are all nuclear-powered, giving them virtually unlimited range, though the reactors need to be refueled at some point during the carrier’s service life.

Supercarriers quickly made their mark on history. Forrestal and Kitty Hawk carriers served in Vietnam, as did Enterprise. The Nimitz class first saw action in the 1981 Gulf of Sidra incident off Libya and, along with other supercarriers, was used extensively in the Gulf War and the wars in Iraq and Afghanistan.

Supercarriers were also involved in the Cuban Missile Crisis, the Gulf of Tonkin Incident, and the Third Taiwan Strait Crisis. More recently, Nimitz-class carriers were involved in airstrikes against ISIS in Iraq and Syria.

Today, the only carriers in service with the U.S. Navy are the 10 Nimitz-class carriers and one from the new Gerald R. Ford-class, which is meant to replace the Nimitz class in the coming decades.

The ships feature a suite of new technology and systems, including the Electromagnetic Aircraft Launch System, which uses electromagnetic power instead of steam.

The first-in-class USS Gerald R. Ford has struggled to get underway, but designers and crew continue to work through the problems, which have helped inform the design and construction of the next carriers in the class.