VIRGINIA BEACH — When Navy Lt. Cmdr. Joseph Dunaway surfaced from a dive off a barge at Joint Expeditionary Base Little... 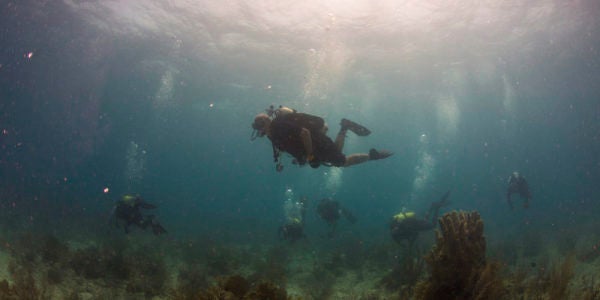 VIRGINIA BEACH — When Navy Lt. Cmdr. Joseph Dunaway surfaced from a dive off a barge at Joint Expeditionary Base Little Creek earlier this week, Petty Officer First Class Ben Coulson logged the time by clicking a red box on a ruggedized tablet computer.

Dunaway removed a large yellow dive computer from his wrist and synced it to Coulson's tablet. Information about his dive – including air and water temperature, his time underwater, depth and surface times – would later be transmitted to the Naval Safety Center's Dive/Jump Reporting System database.

While those actions may seem unremarkable for those accustomed to the myriad ways technology now streamlines mundane day-to-day duties, until now, military divers have relied on manually logging their dive data, a time-consuming process that's open to data-entry errors and sometimes left to the whims of the weather.

“Every once in a while, you get that rare occasion where your paper blows away and that's your whole dive profile,” Coulson said.

A prototype application now seeks to digitize diving, from start to finish. It's the brainchild of Master Chief Petty Officer Scott Brodeur, the senior dive advisor at Navy Expeditionary Combat Command, based at Little Creek. After more than two dozen years of diving and countless hours spent logging various data points about each one – then double and triple checking those records for accuracy – Brodeur approached the Office of Naval Research with the idea after sitting in on a technology solutions briefing.

“We have automation for almost everything we do,” Brodeur said. “We don't have it for something as significant as diving and recording diving.”

Development of the application – software called the Scuba Binary Dive Application 100 – began about a year ago, Joanne Pilcher, an ONR science advisor for NECC, said. The process is simple, and similar to any fitness tracker: A diver plugs the dive computer he or she wears on their wrist during operations into the tablet. The software syncs the information and uploads it to the Navy's reporting system all using a secure process. They even 3-D printed a plastic cradle to hold the dive watch while it is syncing.

The Navy tested the technology during a training dive in the Gulf of Mexico during the summer. Seabees with Underwater Construction Team 1, including Coulson, and Dunaway, from NECC, got the chance to put it to use earlier this week.

Coulson cradled the tablet loaded with the application as he stood on a barge at Little Creek. He showed off how he could preset a dive using the tablet's stylus. Even if a diver is not wearing the dive computer, the software can be used to log data points from the surface and through communications with the diver.

“It's a lot of fun right now and there's a lot more than we can learn from it as well as utilize, which is making our life as a diver that much easier,” Coulson said.

While adoption to the fleet and across the military's other branches could still be a ways off, Brodeur said the ability to capture more accurate data could increase safety while also transforming the amount of administrative work military divers must do. The application could also be useful for the military's jump communities and for special operators. It also makes sense for junior sailors who have grown up with tablet computers and smart phones.