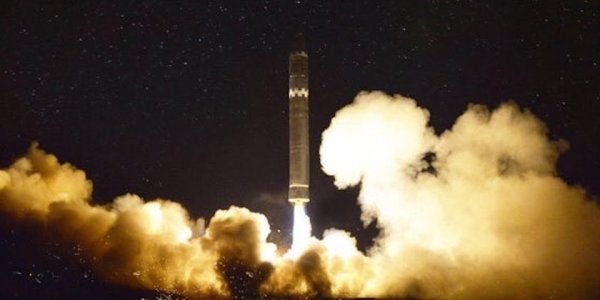 The Center for Strategic and International Studies — relying on satellite photos, as well as interviews with defectors and defense and intelligence officials from around the world — has identified 13 of an estimated 20 undeclared missile operating bases.

The weapons, many of which were developed as part of an energized program over the past few years, are capable of carrying both conventional and nuclear warheads.

The secret missile bases are, notably, not launch sites. Rather, they appear to be focused on the preservation of the North's missile arsenal in the event of a preemptive strike.

North Korea “engages in an aggressive camouflage, concealment, and deception program with regard to its ballistic missile force,” the CSIS report says.

The bases, according to experts, tend to be “rudimentary in nature” and feature underground tunnels for the storage of transporter erector launchers (TELs) and mobile erector launchers (MELs) that could be rolled out and dispersed to pre-prepared launch sites.

The operating bases are scattered across the country, typically located in small mountain valleys, the report said. The one closest to the Demilitarized Zone (DMZ), the Sakkanmol base in the “tactical belt,” is said to house a SRBM unit, one that could accommodate more capable medium-range ballistic missiles if necessary.

This report from @BeyondCSISKorea focuses on the missile base at Sakkanmol, one of the closest missile sites to the demilitarized zone and to Seoul, South Korea. Read their finds here: https://t.co/KZAPVSfqtj pic.twitter.com/o3GlO5Ccbg

The revelation, reportedly long known to American intelligence agencies, is the latest in a string of reports indicating that North Korea is not living up to the expectations of the Trump administration, which demands the complete denuclearization of the Korean Peninsula.

While the administration has celebrated North Korea's self-imposed moratorium on nuclear weapons and ballistic missile testing, the closure of the Punggye-ri nuclear test site, the partial dismantling of the Sohae missile engine testing facility, and the return of American hostages, North Korea has yet to walk the path of disarmament desired by Washington.

After the landmark summit in Singapore, Trump tweeted that “there is no longer a Nuclear Threat from North Korea.”