North Korea Has A Massive Submarine Force. Here’s Why It’s Basically A Joke

North Korea should by all rights be a naval power. A country sitting on a peninsula, Korea has a long … Continued 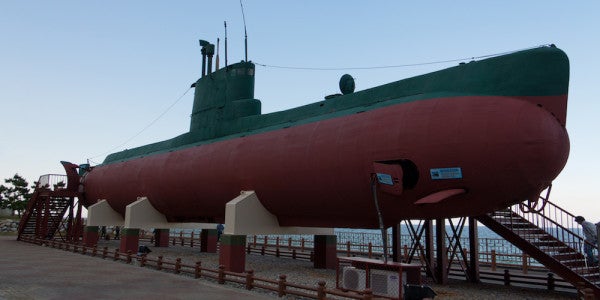 North Korea should by all rights be a naval power. A country sitting on a peninsula, Korea has a long naval tradition, despite being a “shrimp” between the two “whales” of China and Japan. However, the partitioning of Korea into two countries in 1945 and the stated goal of unification —by force if necessary—lent the country to build up a large army, and reserving the navy for interdiction and special operations roles. Now, in the twenty-first century, the country’s navy is set to be the sea arm of a substantial nuclear deterrent.

The Korean People’s Navy (KPN) is believed to have approximately sixty thousand men under arms—less than one-twentieth that of the Korean People’s Army (KPA) ground forces. This, as well as comparable budget, makes the KPN’s auxiliary role to the KPA. KPN draftees spend an average of five to ten years, so while Pyongyang’s sailors may not have the latest equipment, they do end up knowing their jobs quite well.

A substantial number of these sailors serve in the KPN’s submarine fleet, which is one of the world’s largest. In 2001, North Korea analyst Joseph Bermudez estimated that the KPN operated between fifty-two and sixty-seven diesel-electric submarines. These consisted of four Whiskey-class submarines supplied by the Soviet Union and up to seventy-seven Romeo-class submarines provided by China. Seven Romeos were delivered assembled, while the rest were delivered in kit form. Each Romeo displaced 1,830 tons submerged, had a top speed of thirteen knots and was operated by a crew of fifty-four. The Romeo submarines were armed with eight standard-diameter 533-millimeter torpedo tubes, two facing aft. North Korean leader Kim Jong-un was filmed touring and taking a short voyage on a Romeo-class submarine in 2014.

A North Korean Sang-O submarine that ran aground in South Korean waters near Gangneung, in 1996Wikimedia Commons

North Korea’s submarine fleet, while smaller and less well funded than the other armed services, has generated an outsized number of international incidents. On September 18, 1996, a Sang-O SSC operated by the Reconnaissance Bureau ran aground near Gangneung, South Korea. The submarine, which had set a three-man party of commandos ashore two days before to reconnoiter a South Korean naval base, had failed to pick up the party the previous night. On its second attempt, the submarine ran aground and became hopelessly stuck within sight of the shoreline.

Aboard the submarine were twenty-one crew and the director and vice director of the Maritime Department. South Korean airborne and special-forces troops embarked on a forty-nine-day manhunt that saw all of the North Koreans except for one killed or captured. Many committed suicide or were murdered by their superior officers to prevent capture. The remaining North Korean sailor, or agent, is believed to have made his way back across the DMZ. Eight ROK troops were killed, as were four South Korean civilians.

In 1998, a Yugo-class midget submarine, the predecessor to the Yono class, was snared in the nets of a South Korean fishing boat and towed back to a naval base. Inside was a macabre sight: five submarine crewmen and four Reconnaissance Bureau agents, all dead of gunshot wounds. The crew had been murdered by the agents, who promptly committed suicide. The submarine was thought to have become entangled in the fishing boat’s net on its way back home to North Korea, after picking up a party of agents who had completed a mission ashore.

Related: Why North Korea’s Special Operations Forces Should Not Be Underestimated »

How The Other Half Fights
military tech
navy
news
North Korea