A little over a month after the Helge Ingstad sank after colliding with a tanker in a Norwegian fjord, the... 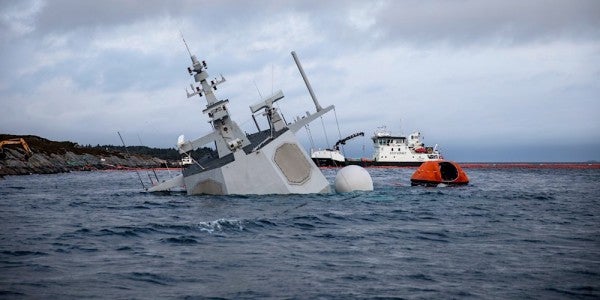 A little over a month after the Helge Ingstad sank after colliding with a tanker in a Norwegian fjord, the Norwegian military has released footage from the submerged frigate.

The warship was rammed by a Malta-flagged tanker in the early morning hours of November 8 in the port of Sture, north of Bergen, which is Norway's second-largest city.

The frigate displaces 5,290 tons; the tanker displaces over 62,500 tons when empty, but when fully loaded, as it was at the time of the collision, that jumps to about 113,000 tons— more than an aircraft carrier. The collision tore a large hole in the starboard side of the frigate's hull, which caused other compartments to flood.

Footage released by the Norwegian military, which you can see below, shows the damage sustained by the frigate.

The $400 million, 442-foot-long warship was returning from NATO's massive, multinational Trident Juncture military exercise when it collided with the 820-foot-long tanker.

According to a preliminary report released at the end of November, control of the frigate's rudder and propulsion systems were lost, which caused the ship to drift toward the shore, where it ran aground about 10 minutes after the collision.

Running aground prevented it from sinking in the fjord, but later, a wire used to stabilize the sunken vessel snapped, allowing it to sink further. Only the frigate's topmasts remain above the surface.

This week, Norwegian explosive-ordnance-disposal divers returned to the ship to remove the missile launchers from its foredeck.

You can see footage of them detaching the launchers and floating them to the surface below.

“All diving assignments we undertake require detailed planning and thorough preparation. We must be able to solve the assignments we are given, while providing as low a risk as possible,” diving unit leader Bengt Berdal said, according to The Maritime Executive.

“Our biggest concern is any increased movement of the vessel.”

With the missiles off the ship, all its weapons have been removed. Recovery crews are preparing to raise the ship, putting chains under the hull to lift it on a semisubmersible barge that will take it to Haakonsvern naval base.

The frigate will not be raised until after Christmas, according to The Maritime Executive.

The oil tanker was not seriously damaged in the incident and didn't leak any of its cargo. Only eight of the 137 crew aboard the Helge Ingstad were injured, but the multimillion-dollar ship was one of Norway's five capital Nansen-class frigates and was one of Norway's most advanced warships. (It also leaked diesel and helicopter fuel, but that was contained and recovered.)

The preliminary report found that the warnings to the frigate, which was headed into the port, went unheeded until too late, allowing the outbound tanker to run into it.

According to the report, the frigate's automatic identification system was turned off, hindering its recognition by other ships in the area, and there was confusion on its bridge due to a change in watch — both of which contributed to the accident.

The preliminary report also raised questions about other ships in the class and the Spanish shipbuilder that constructed it.

The review board “found safety critical issues relating to the vessel's watertight compartments. This must be assumed to also apply to the other four Nansen-class frigates,” the report states.

“It cannot be excluded that the same applies to vessels of a similar design delivered by Navantia, or that the design concept continues to be used for similar vessel models.”