Russia's navy put on a massive display of nuclear force by launching four Bulava intercontinental ballistic missiles from the Yuri... 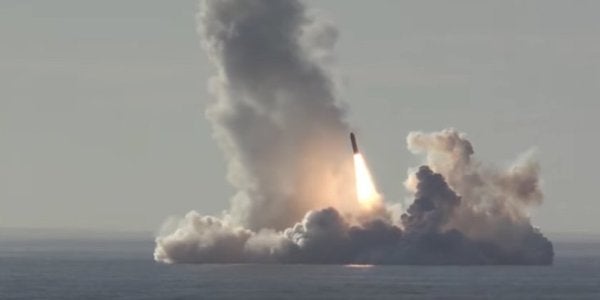 Russia's navy put on a massive display of nuclear force by launching four Bulava intercontinental ballistic missiles from the Yuri Dolgoruky, one of its first new nuclear-powered submarines since the Cold War.

A video released by Russia's defense ministry showed the submarine firing a salvo of four of the missiles within seconds of each other.

The missiles, which have been tested from submarines before but never in a salvo of four, can each carry six to 10 independently targetable nuclear warheads with an explosive yield of 100 to 150 kilotons, according to The Diplomat.

That means that together the missiles fired by Russia had a minimum combined explosive potential of 2,400 kilotons, or about 160 times the destructive force that hit Hiroshima near the close of World War II, Hans Kristensen, the director of the Nuclear Information Project, estimated.

The missiles launched from a submerged submarine that's designed to operate in near silence, meaning the vessels could be virtually anywhere in the ocean at any time.

The U.S. and Russia use nuclear-powered, nuclear-armed submarines to diversify its nuclear forces so that no one strike can ever disable the entire nuclear arsenal.

Given the scale of Russia's nuclear arsenal, the U.S. has no practical means to defend against these or any other ICBMs.

The U.S. also carries out routine testing of its nuclear systems, but rarely in salvos like Russia has.

hiroshima
How The Other Half Fights
military tech
news
Nuclear Weapons