A Look At The Admiral Kuznetsov, Russia’s Only Aircraft Carrier And Floating Garbage Pile

Russia's only aircraft carrier, the Admiral Kuznetsov, is one of the five worst carriers in the world, according to The National... 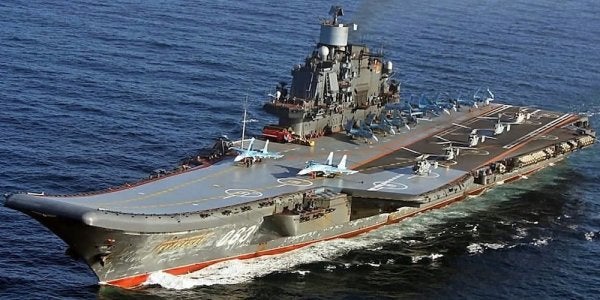 Russia's only aircraft carrier, the Admiral Kuznetsov, is one of the five worst carriers in the world, according to The National Interest.

In October 2016, the Kuznetsov was sailing to Syria through the English Channel on a combat deployment when it was spotted belching thick clouds of black smoke.

“The main problem with the ship is that is has a very problematic propulsion system,” Dmitry Gorenburg, a senior research scientist at the Center for Naval Analyses, previously told Business Insider. “It's just unreliable.”

Before it was sent back to the yards for repairs, the Kuznetsov was always accompanied by a special tugboat in case it broke down, and the plumbing was said to be so bad that most of its toilets didn't work.

It's being refitted at Russia's 35th Ship Repairing Yard in Murmansk and won't be ready to return until 2021.

Inside the Admiral Kuznetsov

The Kuznetsov was laid down in 1983 but not commissioned until 1990.

Kuznetsov-class carriers are powered by eight turbo-pressurized boilers, four steam turbines, and six diesel generators, bringing the carrier to a maximum speed of about 33 mph.

Kuznetsov-class carriers have a crew of 1,600 sailors. But unlike U.S. carriers, the Kuznetsov was built as a defense carrier.

The Kuznetsov will also be fitted with a Pantsir-M/EM air defense system with eight 57E6-E surface-to-air missile launchers — as well as two GSh-6-30K/AO-18KD 30mm six-barrel rotary cannons — upon its return from the shipyard.

According to The National Interest, the end of the Soviet Union “also meant the collapse of funding for the carrier project,” leaving the Kuznetsov to languish without substantial upgrades. The flight deck has a built-in ski jump, angled at 12 degrees, to help with takeoffs. The aircraft are brought up from the hangar bay using an elevator.

The Kuznetsov is set to return to service in 2021, but it may take longer. The Diplomat reported in 2016: “All Soviet carriers were constructed in Ukraine and Russia has lost valuable expertise and technology — particularly surface ship propulsion technology — due to the ongoing crisis in Ukraine.”

admiral kuznetsov
analysis
How The Other Half Fights
military tech
news