Russia celebrated its Navy Day on Sunday with a naval parade on the Neva River in St. Petersburg, a day... 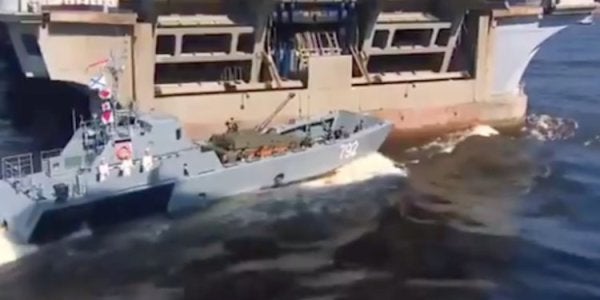 Russia celebrated its Navy Day on Sunday with a naval parade on the Neva River in St. Petersburg, a day of pomp and military power which Russian President Vladimir Putin himself attended.

The parade, which involved 40 warships, 38 aircraft, and about 4,000 troops, was majestically unfolding when a Serna-class landing craft collided with a bridge. Oops.

The video below shows the Ivan Pas'ko going about 8 to ten knots as it collides with the bridge, jolting and even knocking over some of the crew that had been standing at attention.

It's unclear how the incident happened, and there were no reports of injuries, but the bridge and ship were partially damaged, according to Defence Blog, which first reported the incident. Some egos were likely scraped up, as well.

The “Russian Navy will get 26 new warships, boats and vessels, four of them equipped with Kalibr missiles,” Putin said during a speech at the parade, according to TASS, a Russian state-owned media outlet.

Moscow, to be sure, has a history of making predictions about its new platforms that don't always come to pass, such as its new T-14 Armata tank, which the Russian Army will not be purchasing anytime soon despite several previous claims to the contrary.

At the same, the Russian Navy appears to have just received a new capable-looking stealth frigate, the Admiral Gorshkov, which is the first of Moscow's new class of stealth frigates.

accidents
How The Other Half Fights
Humor
Ivan Pas&apos;ko
military tech