The Saudi Arabian capital of Riyadh has endured semi-frequent bombardments from Yemeni rebels’ ballistic missiles, launched in retaliation for the... 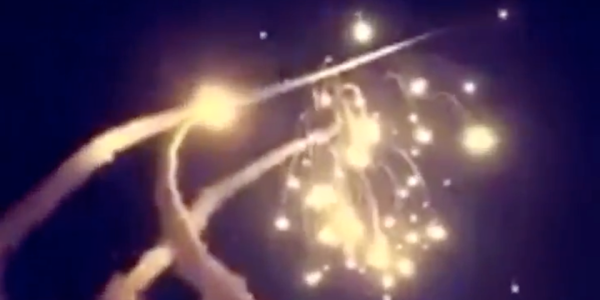 The Saudi Arabian capital of Riyadh has endured semi-frequent bombardments from Yemeni rebels’ ballistic missiles, launched in retaliation for the Saudis’ aerial intervention in the Yemenis’ ongoing civil war. And the Saudis’ U.S.-made Patriot Advanced Capability-3 (PAC-3) kinetic interceptors recently put on one hell of a light show.

The Saudi military says its air defense neutralized seven incoming ballistic missiles fired by Houthi rebels on March 25, the New York Times reports, with fragments of the destroyed munitions showering residential neighborhoods surrounding Riyadh — and lighting up the night sky like the Fourth o’ July, based on eyewitness footage captured during the missile attack.

The footage shows an intense escalation, just days after Yemeni rebels took down a Saudi coalition aircraft with an R-27 air-to-air rocket reportedlymodified into a surface-to-air missile. And for those worried about the Saudi PAC-3s’ reported failures during a Yemeni bombardment back November, Sunday’s performance may serve as a major confidence boost.

But maybe the Saudi countermeasures weren’t all that great. Several amateur videos appeared to show a Patriot interceptor completely missing its target, taking a sickly turn, and becoming a ground missile:

New angle suggests this is actually a spectacular failure of a #Saudi interceptor and not the missile fired at #Riyadhpic.twitter.com/TejVbA8fh3

Bummer, right? Well, that ground missile impacted near a highway and scared the bejesus out of civilians, which seems like the total opposite of what air defenses are supposed to do!

Just a reminder: You can’t spell America without P-A-T-R-I-O-T.

How The Other Half Fights
military tech
missile
news
pac-3