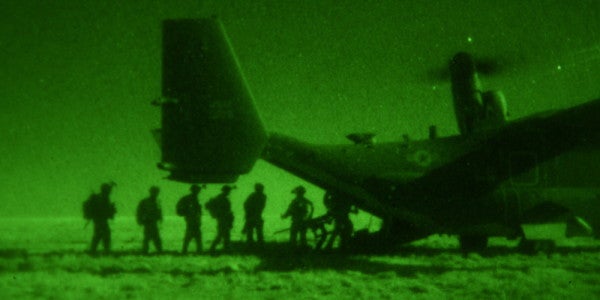 U.S. Special Operations Command purchased at least $26.3 million in extra gear ranging from handheld radios to night vision goggles, according to a Pentagon audit, equipment that could potentially end up in the hands of other U.S. service members.

An audit of the Department of Defense Inspector General made public on March 29 examined five SOCOM equipment programs to ensure that the command, increasingly on the front lines of the Global War on Terror, was appropriately recording excess equipment in its inventory. The findings are not great: three of the five programs — night vision binoculars, next-generation handheld radios, and biometric sensors used for site exploitation — accounted for that eye-popping $26.3 million number.

“For example, USSOCOM did not identify that the U.S. Army Special Operations Command had 17,571 handheld radios according to its property records but was allocated only 13,351 in the capability documents, for an excess of 4,220 radios,” the DoD IG report states. “USSOCOM did not identify excess SO-P equipment because the authorized allowance and allocation data in the [USSOCOM Table of Equipment Distribution and Allowances] were not accurate or complete, and could not be reconciled with inventory.

Related: We Asked Special Operators What Weird Gear They Rely On »

While Military.com referred to the purchases as the result of a “supply snafu,” the DoD IG report paints a frustratingly familiar picture of the complexity of procurement and equipping warfighters. Not only did SOCOM officials fail to maintain “accurate or complete” allocation data, but they also transferred inaccurate figures to spread through capability documents for all five programs and each successive variation. Hobbled by inaccurate authorization data, “officials could not effectively identify excess equipment” — a problem that seems more fit for the ragtag Afghan National Defense and Security Forces than it does America’s most elite warriors.

As part of his proposed fiscal 2019 military budget, President Donald Trump has eyed an 11% bump (of $1.3 billion) to SOCOM’s budget, a significant cash injection driven primarily, as the Tampa Bay Times observed in February, by a 40% increase in the command’s procurement budget. Appearing before Congress that month, SOCOM chief Army Gen. Raymond A. Thomas III urged lawmakers to see the purchase as more than just a “capital expenditure.”

“Special operations forces played an integral role as part of the joint force in the destruction of ISIS' physical caliphate in Syria and Iraq,” Thomas said. “We continue to have outsized effects around the globe, defeating our enemies, training, equipping and enabling our friends and allies, rapidly transforming the organization to be prepared for all future threats and caring for our fallen, wounded and ill and their families.”

Related: How The Military Decides Who’s Built For Its Toughest Units »

U.S. special operations forces, the premier counter-terror and unconventional warfare force on the planet, can and should get all the gear they need to get the job done. It would be a shame if the DoD IG report, rather than helping SOCOM fix the administrative and bureaucratic errors that all complicated organizations face, ends up throwing the brakes on SOCOM’s procurement process — and, in turn, sending special operators downrange with one arm tied behind their back.

But on the upside, perhaps some of that sweet, sweet SOCOM gear will end up redistributed to conventional forces. It’s an inside chance, sure — but it’s better than funneling high-tech gadgets to local law enforcement.

SOCOM officials did not immediately respond to a request for comment. Read the full DoD IG report below: