U.S. Special Operations Command has doled out a hefty contract to upgrade its arsenal of M4A1 carbines with suppressed upper... 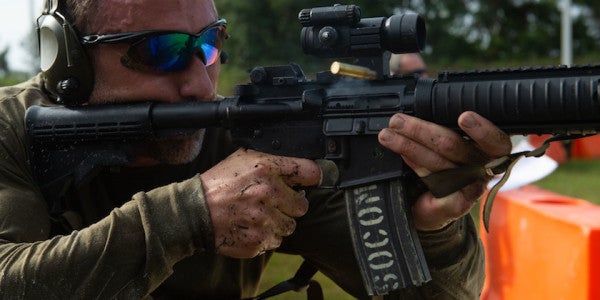 U.S. Special Operations Command has doled out a hefty contract to upgrade its arsenal of M4A1 carbines with suppressed upper receivers, the culmination of a long-running effort to make America’s most elite service members even more silent and deadly.

SOCOM awarded a five-year, $48 million contract to Sig Sauer to provide U.S. special operations forces with what the Department of Defense has designated as Suppressed Upper Receiver Groups, a program restarted last year after being abandoned in 2016.

It’s unclear which Sig Sauer upper that SOCOM has its eyes on, but Guns.com notes that Sig recently dribbled out some details on an upcoming SUR300 upper as an integrally suppressed 6.75-inch barrel with a 19-baffle Ti suppressor, chambered in .300 Blackout ammo. When reached for comment by Task & Purpose, Sig stated that the suppressor model was “completely different” from the SUR300.

This is the second M4 conversion contract between SOCOM and Sig Sauer this year: In February, the former snagged a handful of Sig Sauer MCX Rattler personal defense weapons for close-quarters combat. Also built on an M4A1 lower receiver, the Rattler upper can chamber both .300 Blackout and standard 5.56mm rounds.

As Soldier Systems points out, the Rattler was not adopted under the same SURG program, despite the similarities between the two receivers. But it’s worth noting that the Rattler cansupport an external suppressor (Sig provided a specialized one to SOCOM for Rattler testing), even if that added length sort of defeats the purpose of upper’s shortened 5.5-inch barrel and compact side-folding buttstock.

Both the SURG and Rattler contracts follow SOCOM’s $10 million follow-up contract award to SureFire in November 2017 to continue supplying the command with suppressors and muzzle breaks, a service California-based company has provided since 2011. Taken together, the SureFire and Sig contracts come out to nearly $80 million in the last seven years.

And was that money worth it? Put it this way: None of SOCOM’s targets downrange can say otherwise.