Why would U.S. special operations forces want to manufacture Russian machine guns? Just watch any video of a conflict such... 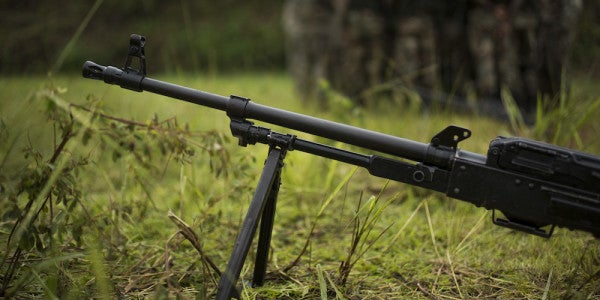 Just watch any video of a conflict such as Iraq and Syria, and the answer becomes clear. Many of the combatants are using Russian or Soviet weapons, or local copies thereof, from rifles to rocket launchers to heavy machine guns mounted on pickups. Which means that when U.S. special operations forces provide some of these groups with weapons, they have to scrounge through the global arms market to buy Russian hardware as well as spare parts.

So U.S. Special Operations Command, which oversees America’s various commando units, has an idea: instead of buying Russian weapons, why not build their own? That’s why SOCOM is asking U.S. companies to come up with a plan to manufacture Russian and other foreign weapons.

The goal is to “develop an innovative domestic capability to produce fully functioning facsimiles of foreign-made weapons that are equal to or better than what is currently being produced internationally,” according to the SOCOM Small Business Innovation Research proposal .

Applicants for the research project must produce “five fully functional prototypes, to include firing of live ammunition, of a foreign-like weapon that resembles the form, fit, and function of a Russian-designed NSV 12.7×108mm heavy machine gun.”

However, SOCOM won’t make the process easy by providing assistance such as technical drawings. Interested companies will have to make their own drawings of foreign weapons, acquire the appropriate parts and raw materials, and create a manufacturing capability.

Companies will also have to “address the manufacture of spare parts to support fielded weapons.” In addition, they must be prepared to start up and shut down production as needed, as well as provide varying quantities of weapons.

SOCOM also emphasizes that foreign weapons must be strictly made in America. Manufacturers “will employ only domestic labor, acquire domestically produced material and parts, and ensure weapon manufacture and assembly in domestic facilities.”

Though SOCOM is starting with a pair of Russian machine guns, the research proposal speaks of foreign-made weapons in general. “Developing a domestic production capability for foreign-like weapons addresses these issues while being cost effective as well as strengthens the nation’s military-industrial complex, ensures a reliable and secure supply chain, and reduces acquisition lead times.”

One wonders whether there could be a copyright issue with producing Russian weapons in America without a license, though Russian and Chinese spies haven’t been reticent about helping themselves to U.S. technology. Either way, it seems like a sensible and economical idea to produce foreign weapons in America, rather than having to procure them from unreliable or unsavory international arms merchants.