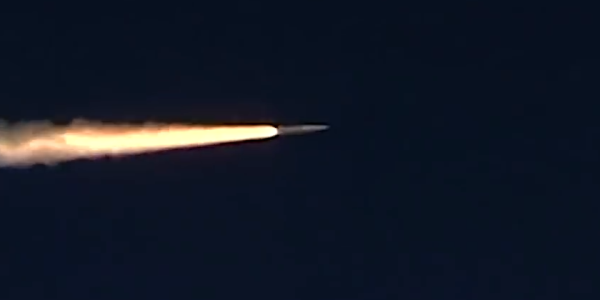 How ready is the United States to defend against “unstoppable” high-tech weapons from Russia and China? The head of U.S. Strategic Command sent mixed signals in congressional testimony Tuesday.

“The first, most important message I want to deliver today is that the forces under my command are fully ready to deter our adversaries and respond decisively, should deterrence ever fail. We are ready for all threats. No one should doubt this,” Hyten said in his opening statement.

But in a follow-on conversation with Sen. Jim Inhofe, Republican from Oklahoma, Hyten was unsure how to best frame the U.S.' defensive capabilities against a hypersonic missile threat.

“If that happens, what kind of defense do we have against the hypersonic threat?” Inhofe asked.

Hyten replied, “We have a very difficult — well, our defense is our deterrent capability. We don't have any defense that could deny the employment of such a weapon against us, so our response would be our deterrent force, which would be the triad and the nuclear capabilities that we have to respond to such a threat.”

“To respond to the threat, we need a small number of low-yield nuclear weapons that we can deploy on our submarine-launched ballistic missiles, still in the New START [Strategic Arms Reduction Treaty] limits,” Hyten said during the hearing.

Hyten told lawmakers that low-yield nukes, in combination with the nuclear triad — operated by the Air Force and Navy — are the best deterrent the U.S. could hope for when going up against Russia, North Korea or China.

The Defense Department has maintained a message of “stop it before it happens” for some months and laid claim that the newly unveiled Nuclear Posture Review protects against threats by buying more nukes that pack a smaller punch.

Lawmakers worry this will spawn a future arms race with enemies rather than encouraging the pursuit of diplomatic avenues.

“Having low-yield weapons does not in and of itself lower the threshold for use of nuclear weapons,” Selva said in January.

Related: US Revives Idea Of Limited Nuclear War That Doesn’t Destroy The Planet»

For example, space-based sensors — an enhanced way to adequately track and respond to missile attacks from space — also must be fielded, the Pentagon's top missile defense director said March 6.

“What we're looking for is to move the sensor architecture to space and use that advantage of space in coordination with our ground assets to relieve the gaps,” Lt. Gen. Samuel Greaves, director of the Missile Defense Agency, said during the annual “Defense Programs” conference hosted by defense consulting firm McAleese & Associates.

Greaves said space-based sensors complement the Defense Department's abilities to accurately track an “enemy threat as it's coming your way,” a reference to hypersonic missile threats.

When asked how the DoD plans to proceed with funding or acquiring the technology, Greaves refuted the idea that space-based sensors can't be made a reality in the near future.

“The requirements are not 'unobtainium,' ” he said. “Let's change the mission, the threat … The question in my mind is not if we can do it. It's six, seven years from now, explaining to the American public why we didn't start yesterday.”