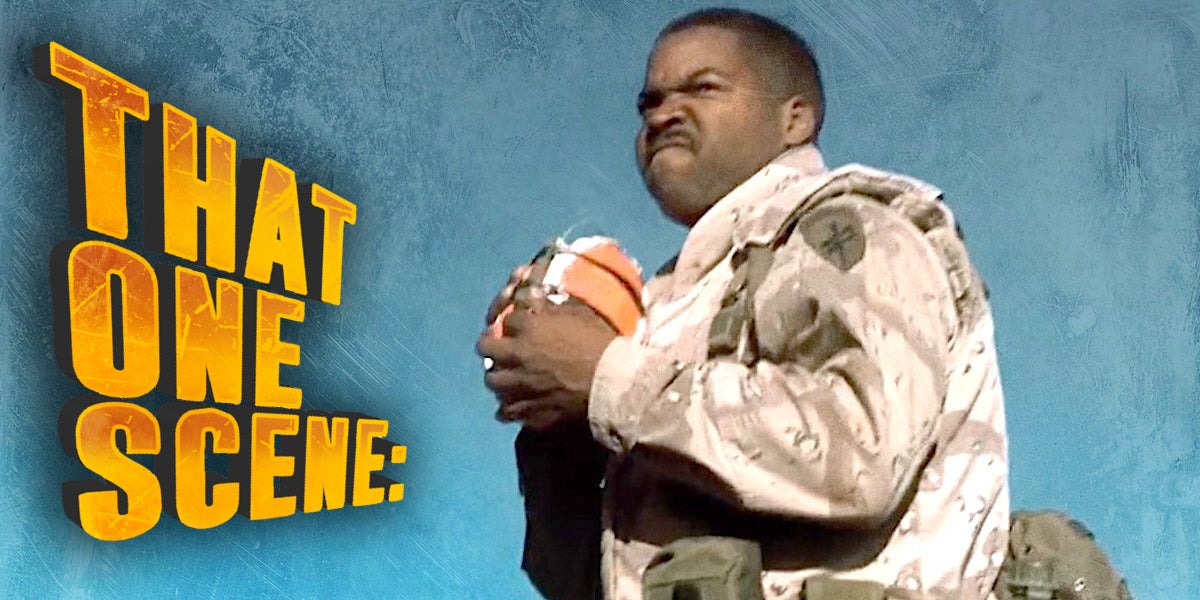 Three Kings is, by most measures, an unusual war movie.

Part treasure hunt, part dark comedy, the 1999 Gulf War saga landed in the glorious decade between the fall of the Berlin Wall and the start of the Global War on Terror when American military might made right around the world. Bloated with success and not yet spread thin pursuing terrorists in countries scattered across the planet, the first invasion of Iraq proves the ideal background to explore some of the banal idiocies of life in the U.S. military, glorious idiosyncrasies brought to life by a marvelous cast including George Clooney, Mark Wahlberg, Ice Cube, and Spike Jonze. A damning critique of U.S. foreign policy, it’s still less a war movie than it is a screwball comedy outfitted with Kevlar and an M4 carbine — and it’s absolutely hilarious.

But we’re not here to talk about all that. We’re here to discuss that one batshit crazy scene where Ice Cube straps C4 to a Nerf football for target practice in the back of a Humvee (which starts partway through the clip below):

The sequence itself may seem familiar to anyone who’s served in the U.S. military, or any military for that matter. The scene is a snapshot of troops doing what troops do best: Messing around while they’re supposed to be off doing something else.

But later in the movie, faced with the task of taking out an Iraqi helicopter armed with an M134 Minigun, that earlier tomfoolery becomes some serious business for Army Staff Sgt. Chief Elgin:

For a movie that’s dripping in 90s-era motifs, this is one of those batshit sequences that’s perfectly suited for a late-decade action film, up there with Arnold Schwarzenneger piloting a Harrier in True Lies in terms of belligerent creativity.

But that’s the thing: for all its creative licenses, Three Kings actually hints at some real-life military ingenuity beneath the surface — namely the fact that the Army actually did try to turn Nerf footballs into grenades for infantry soldiers.

According to some excellent reporting by our colleagues at The War Zone, the Army’s Land Warfare Laboratory (LWL) at the Aberdeen Proving Ground in Maryland once developed the “football device” in the early 1970s during a push to develop hand-thrown anti-tank weapons.

“A hand-thrown short-range device appeared to overcome the deficiencies of standard weapons in an urban environment,” according to a 1974 LWL report on the device, per The War Zone. “A hand deployed device which will give the infantryman in urban warfare the capability to disable a ‘buttoned-up’ tank is desired.”

“Since a regulation size football weighs 14 ounces, it was considered feasible to make a shaped charge grenade within this weight limitation,” the report continued. “In addition, most U.S. troops are familiar with throwing footballs.”

While you can read more on the development of the football grenade from our colleagues at The War Zone here, it’s worth noting that Three Kings director David O. Russell likely had zero knowledge of this device when he slapped the film together. Then again, that’s the glory of good art: sometimes it actually ends up imitating life for a change and not the other way around.

Related: That one scene in ‘Live Free or Die Hard’ that revealed a real-life problem with the F-35