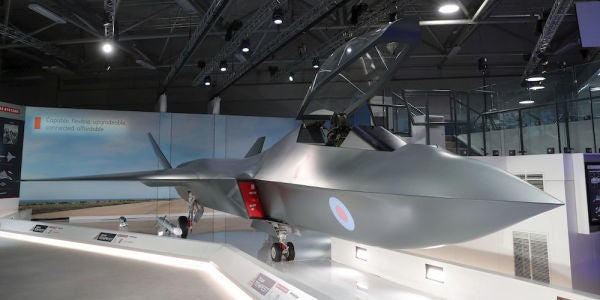 The United Kingdom unveiled a full-sized model of its proposed next-generation fighter jet on Monday at the Farnborough air show in England, according to Bloomberg.

“We are entering a dangerous new era of warfare, so our focus has to be on the future,” UK Defense Secretary Gavin Williamson said as he unveiled the conceptual design, according to Defense News.

The unveiling also coincided with the UK signing a future combat air strategy, which will review its technological spending and capabilities, Defense News reported.

Nicknamed the “Tempest,” the aircraft is a joint venture by BAE Systems, Rolls Royce, Leonardo, and MBDA, and could be an optional unmanned system armed with lasers, swarming UAVs, and be resilient against cyber attacks, according to several news reports.

“While some of these may be abandoned during further development, tackling all of this in a single project places the barrier for success extremely high,” Sim Tack, the chief military analyst at Force Analysis and a global fellow at Stratfor, told Business Insider.

BAE makes the big Farnborough #fia18 splash by unveiling a full-scale model of their Tempest next-gen fighter concept. Still a long way to go but more than we expected to see. pic.twitter.com/EaJmPibwvu

Although “the concept sounds extremely promising, the level of ambition could make actual development and production problematic,” Tack added.

Aside from being dual-engine, the Tempest concept model looks a lot like they took an F35 and shaved the bumps off. pic.twitter.com/D8x21fQmeG

Tack also said that this “program is the British response to seeing Dassault (France) turn towards the Franco-German fighter,” Tack added.

France and Germany announced last July that they would join forces to build an advanced “European” fighter to replace Dassault Aviation's Rafales and Germany's Eurofighter Typhoons, and Dassault recently published a video that gives a glimpse into what that next-generation aircraft might look like.

Williamson said that the UK will allocate $2.65 billion to the aircraft through 2025, at which point a decision will be made about its future, according to Defence Blog.

Williams also said that, if all goes to plan, the aircraft will be operational by 2035, Bloomberg reported.

aircraft
Aviation
bae systems
How The Other Half Fights
military tech