Just months after conducting its maiden flight with a 20-minute low hover and then demonstrating a speed of 80 knots, the … Continued 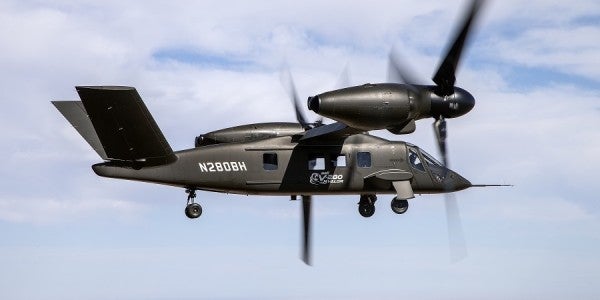 Just months after conducting its maiden flight with a 20-minute low hover and then demonstrating a speed of 80 knots, the advanced V-280 Valor tilt-rotor prototype has achieved an effective transition to cruise mode, hitting speeds up to 190 knots with its rotors smoothly transitioning between its hover and cruise configurations, according to announcement by Bell Helicopter on Tuesday — a major step forward for the experimental airframe that may end up replacing the UH-60 Black Hawk and AH-64 Apache helicopters in the U.S. Army's fleet.

While the footage released by Bell doesn't show the actual rotor transition (which remains one of the coolest things I, a nasty civilian, have ever seen), the company assured Task & Purpose that the cruise-mode video “means the prop-rotors moved to zero degrees for forward flight” without a hitch, adding that the company plans on “gradually expanding the flight envelope” to achieve a target goal of 280 knots in line with its “V-280” designation — twice the speed of the Black Hawk.

First selected in 2014 for the Army’s Joint Multi-Role Technology Demonstrator, the V-280 is expected to offer a major upgrade to the branch’s rotary aircraft fleet beyond simple speed. With an estimated a range of up to 800 nautical miles, space for 14 armed warfighters, and load capacity of more than 12,000 pounds, the tilt-rotor aircraft was designed to haul 23% more troops and 25% more cargo than the conventional utility helicopter.

More important, though, is the matter of confidence in the platform. Given the U.S. military's uneasy relationship with the V-22 Osprey tilt-rotor aircraft, seeing the Valor in action beats the hell of simply reading about its current 90+ hours of rotor turn.

“The V-280 Valor is quickly and consistently demonstrating the maturity of its technology and the overmatch capabilities it will bring to the warfighter,” Keith Flail, the Bell vice president responsible for overseeing tiltrotor technology development, said in a statement. “This first cruise mode flight is another exciting step in our efforts to deliver revolutionary capability for warfighters at a sustainable cost and years ahead of current schedule projections.”

“We will continue to expand the envelope in terms of speed, range, agility, and our other key performance parameters, and continue to bring the proof,” he added. “Our warfighters deserve and need the best our nation can provide and this revolutionary, affordable, sustainable capability is ready to go.”