For almost a year, more than 3,000 V-2 rockets would be launched at civilian and military targets in Belgium, Britain, France, and the Netherlands 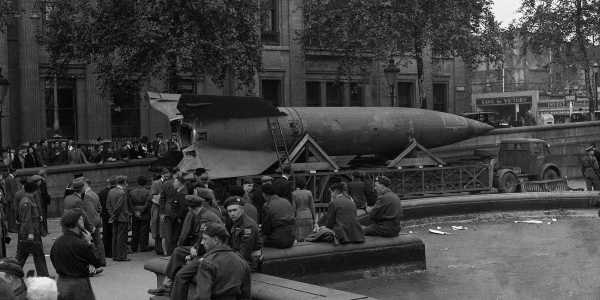 One of the explosions in London left a crater 30 feet wide and 8 feet deep. The site was closed to the public, and censors barred journalists from reporting on it. The blast was blamed on a faulty gas main and quickly hushed up.

Hundreds of explosions in the following weeks forced the British to admit the truth. The Germans had launched a horrifying new type of weapon at France and England: the V-2, the first guided ballistic missile in history.

For almost a year, more than 3,000 V-2s would be launched at civilian and military targets in Belgium, Britain, France, and the Netherlands.

Development of the V-2 started in 1934. The German Wehrmacht had a keen interest in rockets, and some of Germany's best engineers were tasked by the military to create this new “Wunderwaffe” or “wonder weapon.”

The missile had its first successful test flight in October 1942. Traveling over 118 miles and reaching an altitude of 277,200 feet, or 52.5 miles, it was the first rocket to reach the edge of space.

The project was repeatedly downgraded and upgraded during the war, but in 1943 it became one of the largest weapons projects of the Third Reich.

Hitler, angry at the destruction Allied bombing was causing in Germany, wanted to strike Allied cities in revenge. The missile became the second in Hitler's series of “Vergeltungswaffen,” or “vengeance weapons,” and was designated V-2.

About 6,000 V-2 rockets were built. They were intended to be launched from hardened complexes similar to modern missile silos, but Allied bombing and advances on the ground forced the Germans to rely on mobile launch platforms.

V-2s were much more complex and larger than their predecessor, the V-1. They were about 46 feet tall and were equipped with a 2,000-pound amatol warhead at the tip. They also had a range of 200 miles.

After launch, the missile rose over 50 miles into the air and reached a speed of over 3,000 mph, enabling most to reach their targets in just five minutes. V-2s were so fast that they could hit their targets at up to 1,790 mph.

A program of death and destruction

Their speed and operational ceiling made them impossible to intercept, and Allied attempts to jam the V-2's guidance system were useless, as the missile did not use radio guidance. (Its guidance system was an innovation in its own right; gyroscopes and an analog computer in it constantly tracked and adjusted its course to a preprogrammed destination.)

Up to 100 V-2s were launched each day, and they wreaked havoc on Allied cities. Over 2,700 people were killed by the missiles in Britain alone.

One V-2 struck a packed cinema in the Belgian port city of Antwerp, killing 567 people, including 296 Allied soldiers — the deadliest strike from a single piece of aerial ordnance in the European theater.

There is no complete official toll, but it is estimated that V-2 attacks killed anywhere from 5,000 to 9,000 people. Together, V-1 and V-2 attacks caused over 30,000 civilian casualties and left hundreds of thousands homeless.

That number does not include the deaths of 10,000 to 20,000 people who were used as slave labor in V-2 construction at the underground Mittelwerk factory and various concentration camps.

Desperate to stop the strikes, the Allies launched Operation Crossbow — a series of operations and bombing campaigns aimed at destroying the V-weapon program. The Allies were aware of the V-2 as early as 1943 and even managed to obtain V-2 parts with the assistance of the Polish Home Army.

In the end, the V-2, like many of Nazi Germany's so-called wonder weapons, was too little, too late. Though the civilian body count was high, it was smaller than that caused by other weapons.

Moreover, V-2s did almost no significant damage to military targets, and by 1944 the Allied war machine was just too large for Germany to fight off.

The Wehrmacht spent so much money and resources on the V-2 for such minimal military gain that Freeman Dyson, a Royal Air Force analyst during the war, later likened it to “a policy of unilateral disarmament.”

But the V-2 left a lasting legacy. Combined with the advent of nuclear weapons, it proved that the most important weapons of the future would be ballistic missiles.

The Soviets and the Western Allies scrambled to collect as much of the V-2 program as possible when the war ended, and some of the earliest ballistic missiles on both sides of the Cold War were essentially copies of the V-2.

Many scientists from the V-2 program, including its leader, Wernher von Braun, were also directly involved in the U.S. space program, ultimately helping NASA land on the moon in 1969.