Eleven veterans or their surviving spouses received Purple Heart medals Saturday at a ceremony in Honolulu that, for some, was... 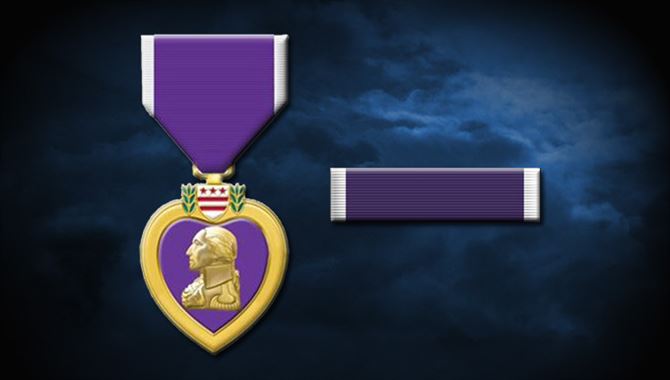 Eleven veterans or their surviving spouses received Purple Heart medals Saturday at a ceremony in Honolulu that, for some, was more than a half-century late.

Thomas Mastin, 93, was an Army private first class serving in Germany in 1945 when a tank that he was riding on hit a mine. The explosion threw Mastin, who landed on his back and temporarily lost the use his legs.

Mastin, then 21, recovered a few days later, but was injured again less than a month later when an explosion, possibly a mortar, went off near him.

Mastin was awarded a Purple Heart for both incidents, but never received an actual medal until Saturday — 72 years later.

“I thought it was pretty nice,” Mastin said after the ceremony at the Oahu Veterans Center. Mastin, who later retired from the Air Force as a master sergeant in the ’80s, said he continues to have chronic back pain, but tries to keep a jovial spirit, laughing often and finding comfort from others in the Military Order of the Purple Heart, Rainbow Chapter 483, a service organization charter by Congress for combat-wounded veterans.

The Rainbow Chapter organized Saturday’s event, where U.S. Rep. Tulsi Gabbard pinned the medals, engraved with the bearers’ names, on the recipients.

Four members could not make the event, but will have private ceremonies where Gabbard can pin their medals on, said Orlander Keller, commander of the chapter.

The Purple Heart is awarded to those who are injured or killed while serving. Keller said George Washington created the medal and said it should signify that its bearer bled for the country and that those awarded should be held in the highest esteem by their countrymen.

Keller said the military requires that the medal be presented to service members during a formal ceremony before their unit or by a governor or a member of Congress. He said he discovered the rule more than two years ago while doing research after he learned one veteran was awarded a Purple Heart, but never received it.

Yoko Katayama Sugel received the medal on behalf of her late husband, Robert Sugel, who died of an aneurysm two months ago. She said he was shot in the head while fighting the Chinese in Korea and struggled throughout his life with post-traumatic stress disorder and vertigo.

She said her husband, 83, was a patriot and volunteered often in memory of those who had fallen and was excited about the ceremony.

Keller, 74, who also received a Purple Heart on Saturday, was a second lieutenant in Vietnam in 1968 when he was injured by a mortar that sprayed him with shrapnel from his face to his waist.

He recalled receiving the Purple Heart unceremoniously on a hospital bed in Vietnam from a Marine general handing out medals from a box to other injured soldiers.

“I felt as though it was a cheap medal, but it’s one of the most beautiful medals there is,” Keller said.

Receiving the Purple Heart in an official ceremony was “tear-jerking,” he said.

Keller was later captured in Vietnam after a plane he was in crashed. He was kept in a hole and tortured over four days by having all his fingers broken, waterboarding, and being hung with his arms behind his back until his shoulders separated. He escaped blindfolded, running in the direction of the sun on his face, unable to lift his arms because of his shoulder injuries. But those injuries were not recognized for a medal because his POW status was never confirmed by the government, he said.

By Rob Shikina, The Honolulu Star-Advertiser