In the middle of the Civil War, the president felt like the nation needed some context, a chance to reflect... 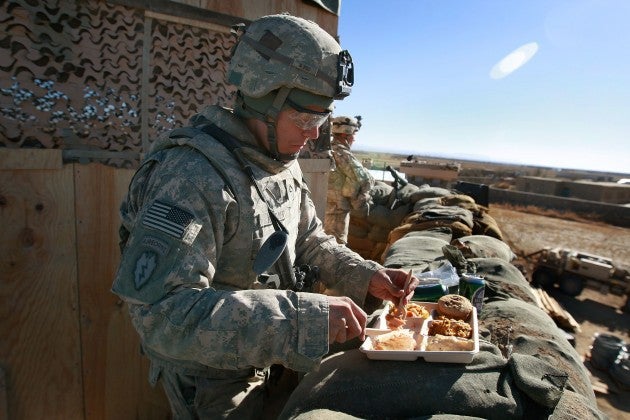 In the middle of the Civil War, the president felt like the nation needed some context, a chance to reflect on America’s collective gifts.  So in 1863 Abraham Lincoln set apart the last Thursday of November “as a day of Thanksgiving and Praise.”

The proclamation begins with this thought:

“The year that is drawing towards its close, has been filled with the blessings of fruitful fields and healthful skies. To these bounties, which are so constantly enjoyed that we are prone to forget the source from which they come, others have been added, which are of so extraordinary a nature, that they cannot fail to penetrate and soften even the heart which is habitually insensible to the ever watchful providence of Almighty God.”

But the creation of a national holiday didn’t end wars, and since that time American service members have spent many Thanksgivings deployed far away from their loved ones.

Here are 15 photos that show some of what that experience has been all about:

1. On the first official Thanksgiving holiday in 1863 Union troops took a break from the fighting to enjoy an actual sit-down dinner.

2. Here a sailor and a Doughboy enjoy turkey legs during World War I.

3. During World War II these soldiers were giving the run of a farmer’s stock of turkeys.

4. A group of soldiers sits down for Thanksgiving meal during World War II.

5. Thanksgiving dinner for the 1st Signal Battalion at Hamhung during the Korean War.

6. During the Vietnam War, the Army designed special Thanksgiving Day meals that were shipped to war zones in metal tins.

9. President George H.W. Bush shared Thanksgiving with the troops in Saudi Arabia in 1990 as they got ready for Desert Storm a few months later.

10. Thirteen years later President George W. Bush followed his dad’s lead and surprised the troops by showing up in Iraq for Thanksgiving dinner.

13. Those who get to eat their turkey in the comfort of a dining facility are relatively lucky. Here soldiers are assigned to the 173rd Airborne Brigade sit down for dinner at Combat Outpost McClain in 2012.

14. Those on the tip of the spear have to get resourceful to get any turkey at all.

16. Wherever our troops are serving in the world the team at Military One Click says “Happy Thanksgiving!” Here’s hoping AFN beams an NFL game to a widescreen TV at a FOB near you and you get all the turkey you can eat.