By Julie Provost On January 20, every four or eight years, presidential administrations change. A new president and vice president arrives.... 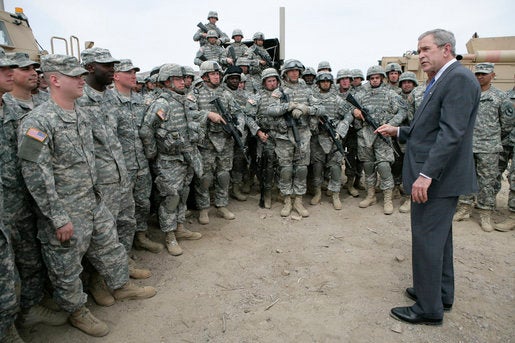 Vice President Joe Biden didn’t waste any time getting started after January 20. On February 1, he and his wife, Dr. Jill Biden, launched the Biden Foundation. This foundation will focus on a few different issues, including military families. The foundation will continue the same policies they pursued while serving in the White House. In addition, to helping military families, they will also focus on foreign policy, equality, strengthening the middle class, cancer, protecting children, and ending violence against women.

Our 43rd President has done quite a bit for the military community since he left office. His book, Portraits of Courage, includes 66 portraits he painted of wounded military veterans. The originals are on display at the George W. Bush Presidential Center at Southern Methodist University in Dallas. Currently, he has painted over 98 wounded warriors as a way to honor their service to their country and show respect for their sacrifice and courage. Any proceeds made from the show or book sales go to his Military Service Initiative which helps service members transition to civilian life.

President Bush helps military veterans through the Bush Institute: Team 43 Sports puts on two events featuring injured servicemen and women: the W100K is a three-day, high-endurance bike ride, and the Warrior Open is a highly competitive golf tournament. Since 2010, more than 140 warriors have participated.

He has partnered with the US Chamber of Commerce, federal agencies, private businesses, and nonprofits to help develop an employment transition road map for veterans.

The Carter Center was founded in 1982 by  Jimmy Carter and his wife, Rosalynn. The center has helped improve the quality of life in over 80 countries. In 2010, the Carter Center held a national symposium on the reintegration of veterans into families, communities, and the workplace. During the meeting, there was talk about the damaging effects of stigma and discrimination on the health of veterans and their families.

George H. W. Bush started the Points of Light Foundation in 1990 as an independent, nonpartisan nonprofit encourage and empower the spirit of service in our nation. In 2007, the Points of Light Foundation and HandsOn Network merged to become Points of Light. It is now the largest volunteer management and civic engagement organization in the nation. Through this organization, there have been 250,000 service projects per year in 30 different countries. The Points of Light’s military programs connect service members, veterans, and their families with their communities through service and support. You can help volunteer to support your local military community, learn how your community can support military members and veterans, and donate to support the mobilization of thousands of volunteers.