I’ve gathered six unique online communities just for military spouses. From forums to book clubs to articles, you’ll find a wealth of information and camaraderie in the groups that speak to your experience. 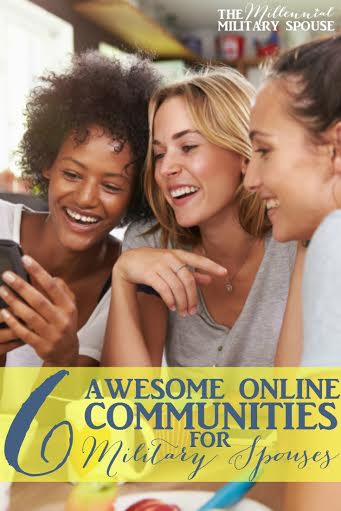 Perhaps there’s nothing so scary (or lonely) as feeling completely on your own. When my then-fiance shipped off to Afghanistan, I realized that I had no clue how to deal with deployment. I hadn’t ever seen anyone close to me go through it. I didn’t know what to expect other than the little guidance I had received from watching movies like Stop-Loss and Jarhead. And those movies aren’t really helpful at all. (I mean, really. They’re pretty worthless when it comes down to real life.) I wasn’t part of the FRG–I didn’t even know that I could be part of it… or what an FRG was. I didn’t have an idea what to expect or how to deal with the rush of emotions and questions racing through my head. I was totally on the outside, looking in.

I was part of a community of which I wasn’t part.

So, like most military significant others and spouses who find themselves in the exact same position, I turned to the internet to ask questions and deal with the very terrifying reality of sending a person you love to war.

I’ve gathered six unique online communities just for military spouses. From forums to book clubs to articles, you’ll find a wealth of information and camaraderie in the groups that speak to your experience.

While every military family is welcome at Homefront United, the articles and information are catered specifically to the National Guard and Reserves communities. Homefront United is written by Guard and Reserves spouses and they offer a wealth of knowledge and resources that you’ll be hard-pressed to find anywhere else. You’ll want to join their Facebook group, too, where they often post fun giveaways and opportunities.

The American Military Partner Association was created with the intent of advocating and creating a space for LGBT military families. The website hosts a wealth of information and resources so that families can advocate for themselves and join a wider community of “modern military families.”

The majority of military spouses are female… but male spouses are a growing demographic and need a little representation too! Enter: Macho Spouse, a community specifically for guys who love members of the military. The site offers articles, video, and probably most importantly, forums where male spouses can connect with each other to ask questions and offer support.

Honestly, sometimes the military lifestyle doesn’t lend itself to a healthy one. The spouses at InDependent are trying to change that by creating a community of military spouses interested in in health, fitness, and wellbeing topics. Read their articles and participate in the multiple Facebook groups dedicated to different health topics. You can even join groups that are location-based so you can connect with other spouses in your area.

NextGen, written by a variety of different military spouses, focuses the modern military family with articles spanning careers, finances, military life, relationships, and more. NextGen works with different non-partisan political initiatives like Homefront Rising and #KeepYourPromise. Keep an eye out for their Facebook book club! (Full disclosure: I am a regular contributor to NextGen.)

There’s no way this list could possibly be all inclusive… so what would you add? Where have you found strength, inspiration, empathy, and answers? What sites do you frequent? I want to hear all about them—leave them in the comments!