6 tips for military spouse entrepreneurs on growing your social media into a gigantic success! 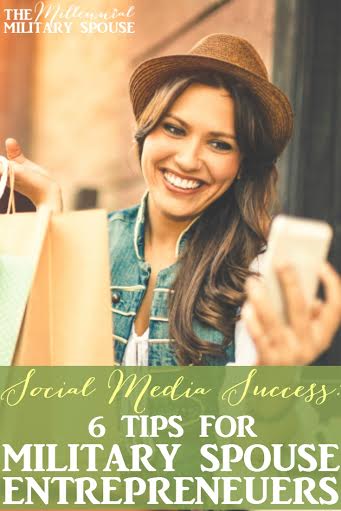 So she turned to Twitter. And, inadvertently, she began growing her base even before she had a business.

With the anonymous Twitter handle, @DeploymentPrbs, Moo began reaching out to other military spouses and significant others. She built a support network and soon became the person that others came to for advice and help. Now with almost 4 years under her belt as an Army spouse, she has over 8,000 followers and has sent more than 81,000 tweets into the Twitterverse. Moo began her business quite by accident. Tired of trying to find patriotic attire that met her style aesthetics (“everything had rhinestones or screaming eagles”), she decided to design her own Red Friday shirt. Armed with an interior design degree, she designed one and shared it on Twitter simply because she was excited about it. But other people wanted to place orders too. The first order fell through with the screen printer; Moo stopped long enough to order a screen printing kit and learn how to do the entire process on her own.

From there, Deployment Problems was born—from sweatshirts to leggings to headbands to bows, Moo has created a popular small business brand with virtually no prior business experience. Initially, the shop was hosted on Etsy, but Moo found that her following could support an independent website, even though it was still a nerve-wracking step off a cliff: “It’s scary to go from Etsy where you can pull other people who are searching and go to your own website and rely on your own traffic and what you can bring there.”

Moo has artfully taken her huge social media presence (which also extends to Facebook and Instagram) and created a military-specific brand that spouses and significant others go crazy over.

I’m talking about sales that sell out in under 2 minutes. That kind of crazy. That kind of overwhelming customer loyalty. If Deployment Problems was a brick-and-mortar, you’d see women tenting overnight on the sidewalk, breaking down the doors the minute the open sign is turned, and stripping the racks bare.

Here’s how she does it: Blend business with the personal
While Moo prefers to keep her name and photo out of the limelight, her social media accounts tell her story… and her business’ story. You’ll see pictures of her dogs alongside posts about her next sale. When she and her husband decided to announce the gender of their baby-to-be, she was “blown away” by the response: 800 favorites on just one tweet, not to mention the comments and likes on Facebook and Instagram.

Relationships come first
At the heart of Moo’s success is her enormous sense of possibility and positivity. Her posts are always upbeat, funny, and studded with emoticons. While she does promote her business with her social media, she doesn’t hard-sell anyone. “I think keeping that blend of a real person with a real life might be part of it [her social media popularity] because they know me. It’s not someone selling them something. It’s me and they’re supportive because it’s me.”

Enjoy people
“I enjoy people. I think that’s part of it,” Moo says when reflecting on her loyal social media following. Moo doesn’t see her social media as an outgrowth of her business; it’s a way to connect with other people—regardless of whether or not they’re a customer. “I’ll have girls message me all the time who want to talk about what’s going on with them. I’ll spend an hour talking to them… I really do feel like a lot of them are my friends.”

See your followers as people
It might sound trite, but behind each follower on social media, there’s a person. Moo doesn’t forget that and doesn’t treat her followers as cash cows. Instead, she sees them as friends. “I know these girls. There are some who have followed me from the very beginning. There are girls who have started as customers who are now friends.”

Work it
Moo doesn’t cover up or glamorize the aspects of her small business. It’s hard work. She’s made mistakes along with having smashing successes. “You have to be willing to really work,” she says. Growing her business and social media presence has taken time, but it’s a labor of love. “Find something that you like and believe in and you enjoy and then make that your life for a while. Work it until it happens. A lot of people who try to start a shop or a boutique get discouraged because they don’t get sales right away.”

Don’t give up
Many people expect a post or tweet to go viral. While that can happen, it doesn’t happen often. It’s about longevity. According to Moo, “If you stick with it for awhile and keep saturating social media, it’ll [your business] keep growing.”

Moo’s busiest season is the summer and this year she’s coming up on a huge milestone for Deployment Problem’s: its 2,000th website sale. Make sure that you follow her on social media—you’ll find out when it happens. And it will be awesome.